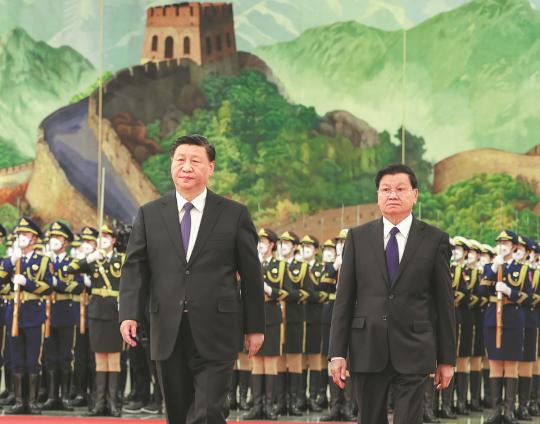 China and Laos agreed to push forward building the China-Laos community with a shared future to bring more benefits to their peoples and promote regional peace, stability and development when President Xi Jinping met with visiting Lao President Thongloun Sisoulith in Beijing on Wednesday.

At the beginning of their meeting, Xi, also general secretary of the Communist Party of China Central Committee, informed Thongloun that Jiang Zemin had passed away in Shanghai on Wednesday due to illness.

Xi said Jiang was an outstanding leader enjoying high prestige acknowledged by the whole Party, the entire military and the Chinese people of all ethnic groups. Jiang was also a great Marxist, a great proletarian revolutionary, statesman, military strategist, diplomat, a long-tested communist fighter and an outstanding leader of the great cause of socialism with Chinese characteristics, he said.

Xi expressed profound grief over Jiang's passing and called for efforts to turn sorrow into strength in striving in unity to build China into a modern socialist country in all respects and advance the great rejuvenation of the Chinese nation on all fronts.

Thongloun, also general secretary of the Lao People's Revolutionary Party Central Committee, expressed deep condolences over Jiang's passing. He added that the LPRP and the Lao people empathized with the CPC and the Chinese people for the huge loss.

Thongloun commended the remarkable development progress that the Chinese people achieved under Jiang's leadership, saying that Jiang made important contributions to the cause of socialism with Chinese characteristics.

As a close friend of the LPRP and the Lao people, Jiang also played an important leading role in developing Laos-China relations, Thongloun said. He added that the LPRP, the Lao government and the Lao people will work together with their Chinese comrades to advance the bilateral friendship.

Thongloun was the third leader of a socialist country to visit China after the conclusion of the 20th National Congress of the CPC, following Nguyen Phu Trong of Vietnam and Miguel Diaz-Canel Bermudez of Cuba. It was also the first in-person meeting between the leaders of China and Laos since the start of the COVID-19 pandemic.

Xi said the CPC is willing to work with the LPRP to strengthen solidarity, cooperation, exchanges and mutual learning, adhere to the people-centered development philosophy, be firmly confident with the socialist path and jointly explore new paths for mankind's modernization.

Noting that the building of the China-Laos community with a shared future has achieved fruitful results, with the China-Laos Railway an example, Xi said the two countries should hold on to the correct direction of bilateral ties under the new circumstances.

He called on the two sides to promote cooperation in law enforcement and defense, enhance integration of interests and the synergy of development strategies, and deepen economic, trade and investment exchanges.

The president also said that China will continue to provide assistance for Laos to relieve the difficulties it is currently facing, and keep expanding communication and cooperation in fields including science and technology, education and youth as well as deepening coordination within frameworks such as China-ASEAN cooperation.

Thongloun said that in today's volatile world, China is the mainstay of safeguarding global peace and stability and is committed to promoting the common development of mankind.

Thongloun expressed his hope that the two parties and governments will strengthen exchanges and share their experience on governance, deepen cooperation in public security and national defense, promote pragmatic cooperation, promote synergy in their development strategies and enhance people-to-people exchanges, so as to further develop bilateral ties.

After the meeting, Xi and Thongloun witnessed the signing of a series of cooperative documents in areas such as cooperation of political parties, trade, economy, finance, culture and education.