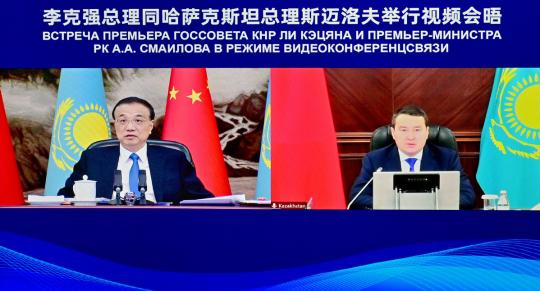 Speaking during a meeting via video link with Kazakh Prime Minister Alikhan Smailov, Li said that in the 30 years since the establishment of diplomatic relations, ties between China and Kazakhstan have developed significantly as well as benefited both countries and their peoples.

In an indication of the high level of importance that China attaches to its ties with neighboring Kazakhstan, Xi chose the country as the first stop of his first overseas trip since the start of the COVID-19 pandemic.

During the visit, the two countries' heads of state agreed to build a community with a shared future defined by lasting friendship, a high degree of mutual trust and sharing weal and woe.

Li said that China is ready to maintain close high-level exchanges and communications at various levels with Kazakhstan, strengthen the synergy of their respective development strategies and better coordinate with each other in regional and international affairs.

It is hoped that the two highly complementary economies will implement their intergovernmental plan for economic and trade cooperation, and accelerate the negotiation and signing of the latest investment protection agreement and the cooperation plan in production capacity and investment, he said.

Over the past decades, bilateral trade between China and Kazakhstan has jumped from only $368 million in 1992 to $25.3 billion in 2021. In the first seven months of this year, the figure reached $17.67 billion, a year-on-year increase of 18.9 percent, according to the Foreign Ministry.

Li also urged the two sides to promote interconnectivity and increase the cargo volume through their border ports.

Noting that energy cooperation is the cornerstone of bilateral practical cooperation, Li said China hopes Kazakhstan will secure its gas supply to China as the contract stipulates and increase it as much as possible during the winter.

China is willing to expand its imports of quality green agricultural and livestock products from Kazakhstan, the premier said, calling on the two countries to explore new growth areas of cooperation in fields such as finance and cross-border e-commerce.

The two sides should also continue with their negotiations on a mutual visa-exemption agreement in order to better facilitate the exchanges between their peoples, Li said.

Smailov said his country highly values developing relations with China and is willing to take the opportunity of the 30th anniversary of diplomatic relations to deepen political mutual trust, implement the cooperation plan in economy and trade between the two governments, and enhance exchanges and cooperation in areas including production capacity and energy.