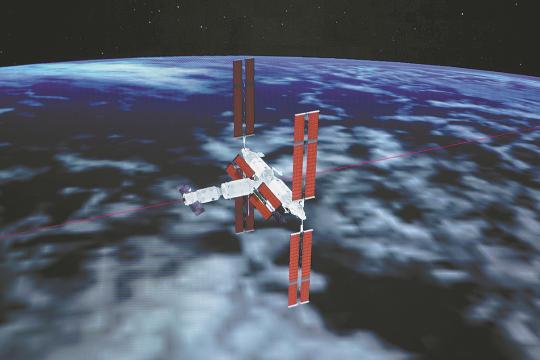 This simulated image captured at Beijing Aerospace Control Center on Nov 12, 2022 shows China's cargo spacecraft Tianzhou 5 having conducted a fast automated rendezvous and docking with the combination of the space station Tiangong. (Photo/Xinhua)

The China Manned Space Agency is doing preparatory work for the training of foreign astronauts to fly aboard the nation's Tiangong space station, said Ji Qiming, assistant director of the agency.

Ji said several nations have expressed to China their wish to send their astronauts to the Tiangong station.

"China is negotiating with relevant parties on this matter. We are actively preparing for training work for foreign astronauts," he said.

After Tiangong's completion, China will continue to cooperate with foreign countries and regions that are dedicated to the peaceful use of space to carry out more joint projects, so that Tiangong's scientific and technological achievements can benefit all people around the world, Ji said.

China has also offered opportunities to foreign scientists to use the Tiangong station to advance their research, he added.

"Currently, multiple space science programs that we have selected together with the United Nations Office for Outer Space Affairs and the European Space Agency are proceeding well according to schedule. We will start sending their equipment to our space station in 2023," he said.

Hao Chun, head of the space agency, said previously that his agency had signed agreements with the UN Office for Outer Space Affairs on space station cooperation, inviting scientists from around the world to submit their research proposals for experiments aboard the Chinese station.

According to designers at the China Academy of Space Technology, Tiangong is capable of connecting with other nations' spacecraft that have the same hatch design as that used by the Chinese space station.