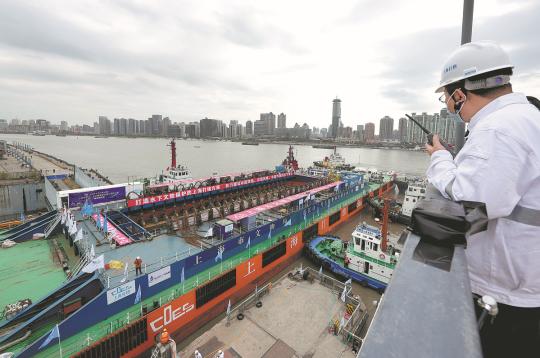 The shipwreck Yangtze River Estuary No 2 Ancient Vessel is hauled into a former shipyard in Shanghai on Friday. The ancient vessel was salvaged from the riverbed near Shanghai on Monday. (GAO ERQIANG/CHINA DAILY)

The 150-year-old shipwreck known as Yangtze River Estuary No 2 Ancient Vessel was successfully moved on Friday to a former shipyard that is going to become a museum. It was lifted from the riverbed near Shanghai on Monday morning.

The boat, which dates back to the reign of Emperor Tongzhi (1862-1875) in the Qing Dynasty (1644-1911), was carried to the shipyard in Yangpu district by Fenli, the salvage vessel, which placed it in on a saddle-shaped concrete pedestal at Dock No 1 in the shipyard.

Fenli will then open its stern and retreat into the open water in the coming days, leaving the shipwreck alone in the dock, said Lu Wei, deputy director of Shanghai Salvation Company.

The new technologies and equipment developed especially for the salvage of the ancient boat will "surely be used in the future for more underwater archaeological operations," Lu said.

Water will be pumped out of the dock, and protective facilities will be installed around the container. Exposed parts of the ancient vessel will be reinforced and the whole boat humidified.

"The boat was accustomed to the environment of the seabed as it stayed there for 150 years," said Zhai Yang, deputy director of the Shanghai Research and Protection Center of Cultural Relics. "Now we have to create an adequate surrounding for the vessel, to minimize the impact from the changed environment."

By October next year, an archaeological lab will be built with a security system and protective facilities installed, as archaeologists will move on to the next step of the work — sorting the objects and carrying out protective measures for the whole structure of the boat.

The shipwreck museum will become an integral part of the area on the western bank of the Huangpu River in Shanghai, which has a rich industrial heritage and witnessed the emergence and development of the first wave of industrialization in China.

"The museum will showcase the active working state of the archaeological process," he said. "Second-time visitors could very likely find the exhibition changed from their last visit. It will be quite a fun experience to witness the progress."

The vessel is believed to have 31 cargo chambers. Items have already been retrieved from four selected chambers, including ceramic objects made in Jingdezhen, Jiangxi province. Also found on the vessel or scattered near it were purple clay objects, pots made in Vietnam, pulleys, cables and construction material.