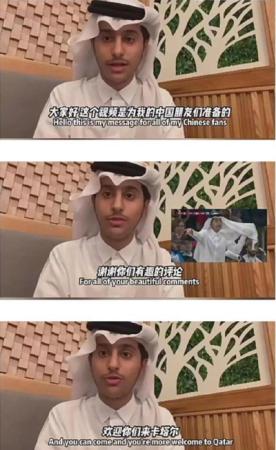 Abdulrahman records a video expressing his gratitude for the love he has received from the Chinese people. （Photo/Screenshot photo/Sina Weibo）

Without the national team to support, Chinese soccer fans are rallying behind this year's FIFA World Cup mascot instead.

The official mascot for the event, which is being held in Doha, Qatar, is La'eeb, a cutesy kaffiyeh-inspired figure whose name means 'super-skilled player' in Arabic. But Chinese fans have affectionately dubbed the mascot the "wonton wrapper" because of its resemblance to the food.

The adoration toward the mascot has also made a Qatari youngster a social media sensation in China.

During the live broadcast of the opening match between Qatar and Ecuador on Sunday, a teenage boy in the audience wearing a kaffiyeh, a traditional headdress for men in Qatar, grabbed people's attention by making dramatic facial expressions showing his unhappiness about his team's performance. The Qatari team ultimately lost the match.

Chinese fans began posting screenshots of him next to La'eeb making the same poses and facial expressions, and he was dubbed the 'wonton wrapper prince'. People also have drawn cartoons of him and made his facial expressions into memes.

According to China Central Television, the teen is actually Abdulrahman Fahad al-Thani. Based on his family name, it's believed that the 16-year-old — who said Cristiano Ronaldo is his favorite player — is a member of the Qatari royal family.

On Thursday, Abdulrahman recorded a video expressing his gratitude for the love he has received from the Chinese people. It was posted on Chinese social media on Thursday.

Many people commented that he is welcome to visit China as well.