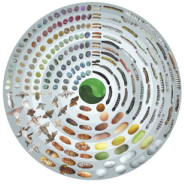 Following in the footsteps of the Human Genome Project launched in 1990 and the Rice Genome Project in 1998, another genome research project — this one conducted by Chinese scientists on sericulture — has made a breakthrough.

The world's first super pan-genome map of a silkworm has been created by scientists in Chongqing, according to a news release issued from Southwest University on Oct 9.

The project, conducted at the university's State Key Laboratory of Silkworm Genome Biology, will enable silkworm science to enter the information age.

Dai Fangyin, a professor and director of the laboratory and chief scientist of the National Sericulture Industry Technology System, said he and his group spent four years conducting in-depth sequencing of 1,078 silkworm samples before finally coming up with the world's first super pan-genome map.

The silkworm genome map has the largest long-read pan-genome sequencing of the world's plants and animals, and is of the highest quality, according to Dai.

"This is the biggest achievement in global sericulture research in the past century," said Xiang Zhonghuai, academician of the Chinese Academy of Engineering and an expert in silkworm genetics and breeding.

Xiang said the super pan-genome map of the silkworm will solve the breeding bottleneck and open up a new era for functional genomics and molecular breeding.

Xiang noted that the silkworm, an important biological and genetic resource that supports key industrial and scientific research, has sparked international resource competition.

In 2003, researchers at Southwest University released the world's first silkworm genome framework. "It has paved the foundation for the newly released super pan-genome map, which is a milestone for the 21st Century Maritime Silk Road," Xiang said.