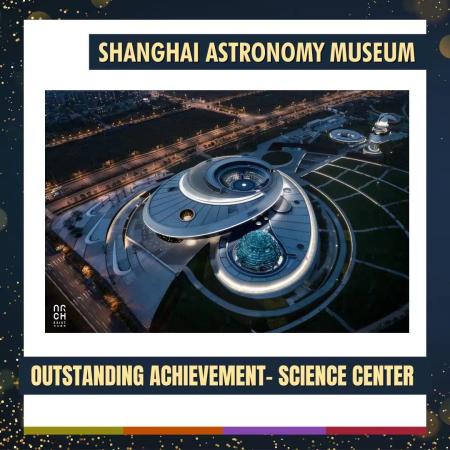 Shanghai Astronomy Museum has been awarded the 29th Thea Awards for Outstanding Achievements on Nov 15 at the International Association of Amusement Parks and Associations (IAAPA) in Orlando, the United States.

Announced by the Themed Entertainment Association, it is the first Chinese museum as well as the first science and technology museum to win this award, and one of the 13 award-winning projects in the world.

Other winners include attractions such as Chasseurs de Tornades of Futuroscope in France, theme parks like Universal Studios Beijing and immersive live experiences like Particle Ink: Speed of Dark in Las Vegas.

The ceremony of the 29th Thea Awards for Outstanding Achievements will be held in Anaheim, United States on April 15, 2023.

"The winners of the previous Thea Awards for Outstanding Achievements are all industry leaders emerging from hundreds of projects around the world, such as Disney Resort, Legoland, London Victoria and Albert Museum, and the Natural History Museum of Los Angeles County," said Xin Ge, deputy curator of Shanghai Science &Technology Museum.

"The honor awarded by the jury to the Shanghai Astronomy Museum is based on the active exploration of the museum in the field of displaying astronomical science themes and audience experience, and it has achieved outstanding achievements and broad influence with the joint efforts of the museum's constructors, experts and other participants," Xin added.

As the branch of the Shanghai Science &Technology Museum, Shanghai Astronomy Museum was opened to the public in July 2021, making it the largest planetarium in the world.

In addition to the astonishing exhibition areas, the museum is equipped with research-class telescopes, an 8K dome theater and the world's most advanced optical planetarium. It has received nearly 800,000 visitors so far.