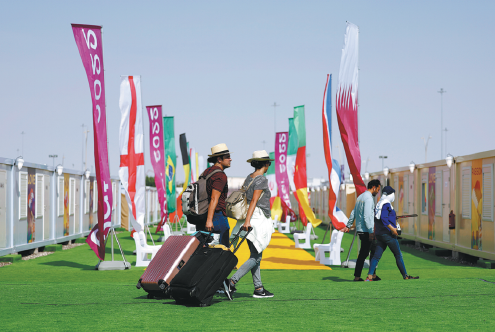 A village for visiting soccer fans in Doha, with 6,000 such cabins, is targeted at customers on a lower budget. The 3.1 square-kilometer site can house up to 12,000 people, and has a metro station, bus stop, temporary restaurant and a convenience store, according to Associated Press.

Each cabin is designed to accommodate one or two people, and contains basic furniture including beds, nightstands, a small table and chair, air conditioning, a toilet and a shower. Compared with Qatar's hotels, the fan village is a relatively cheap option, with each cabin costing around $200 a night. At a smaller site further out from central Doha, some rooms are priced at $80, AP reported.

The commute between the fan village and the nearest World Cup venue, Al Thumama Stadium, takes approximately 20 minutes by car.

According to China Central Television, the container-style cabins are made in China, mostly by factories in Guangdong and Zhejiang provinces. Chinese companies have provided about 10,000 cabins to Qatar World Cup organizers.

"The components of the cabins were shipped to Qatar, after which the local workers assembled the cabins like building Lego houses. It only takes about four hours for two or three experienced workers to finish assembling each cabin," said CCTV reporter Zhao Yuanfang.

Like many soccer fans who have traveled to Qatar, Chinese fans have had to search hard for a room in the country. He Sheng traveled from Guangzhou, Guangdong, but decided against staying in a cabin.

"It's pretty hard to book a hotel room in Qatar. Many of the rooms were booked even a year before, most of which are occupied by the players, officials and volunteers. I also heard about the $200 cabin. But my final choice was an apartment, which is more convenient for me as I will stay here until the end of the tournament," He told media after arriving in Doha.

Omar al-Jaber, the head of accommodation at Qatar's Supreme Committee for Delivery and Legacy for the tournament, told AP that most fans still preferred hotels, apartments or villas, but the fan village had attracted those seeking budget accommodation.

The high cost and scarcity of hotel rooms have been major concerns for fans planning to attend the World Cup in Qatar, which has an estimated 130,000 rooms available per day for the tournament. Organizers in Doha have also offered accommodation at camping and cabin sites, and on ships.

Fans have also been encouraged to stay in neighboring countries and fly in for games. Dubai in the United Arab Emirates has begun welcoming World Cup fans who will travel on to Qatar to watch the games.

"The shuttle flights option is one of the options for people who stay in our neighboring countries and …they would like to just spend a day to attend the match," said al-Jaber.

"So this is a good option for them. If they would like to come and stay, they are more than welcome, of course, and there are many, many options for them.

"We have enough accommodation and people can still come and enjoy the tournament and of course they can choose what exactly they are looking for from the accommodation."