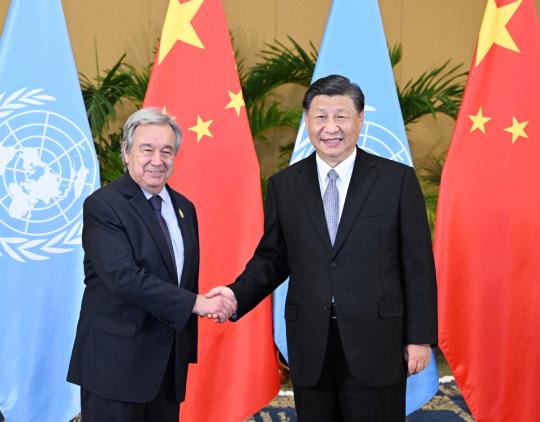 China will work with the United Nations to push for concrete progress in implementing the Global Development Initiative and the Global Security Initiative in order to bring more stability and certainty into a volatile world, President Xi Jinping said on Wednesday.

Xi made the remark while meeting with UN Secretary-General Antonio Guterres on the sidelines of the 17th G20 Summit in Bali, Indonesia.

At a time when important changes have taken place across the global, Xi said all countries must put mankind's future and destiny above everything else and work together to overcome difficulties.

"In particular, major countries should lead by example, instead of creating divisions or confrontations, or even profiting from others' misfortunes," he said.

Xi expressed China's willingness to push for mankind's progress with Chinese modernization and to bring new opportunities for the world through the country's own development.

Noting that developing countries, especially vulnerable ones, have been severely affected by the unprecedented challenges facing global development, Xi said development must be put at the center of the international agenda and efforts must be made to enable the fruits of development to better benefit every country and every person in a fairer way.

To this end, all countries should act on what they say and present their achievements to the world instead of speaking empty words, he said.

Xi also said that to achieve world peace, the purposes and principles of the UN Charter must be observed and the legitimate security concerns of all countries must be taken seriously.

China is a staunch supporter of the international system with the UN at its core and will continue to uphold true multilateralism and support the UN's work, he added.

"I'm convinced that the historical trend of peace, development, cooperation and win-win results is irresistible and that mankind has a bright future," Xi said.

This is the second meeting between Xi and the UN chief this year. In February, Xi met with Guterres when he traveled to China to attend the opening ceremony of the 2022 Olympic Winter Games in Beijing.

In their meeting on Wednesday, Guterres again congratulated Xi on his reelection as general secretary of the Communist Party of China Central Committee.

Guterres said developing countries are facing one crisis after another regarding food, energy and climate change, and there still remains great inequality in global development.

The UN highly commends China for upholding multilateralism, he said, noting that China has played an incomparable role in helping developing countries.

Guterres also said the UN firmly supports the one-China principle, which is a red line that cannot be crossed and must be respected.