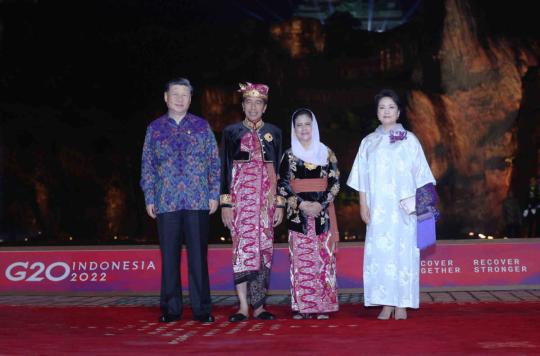 President Xi Jinping and his wife, Peng Liyuan, pose for a photo on Tuesday with Indonesian President Joko Widodo and his wife, Iriana Joko Widodo, before a welcoming dinner for world leaders at the G20 Summit in Bali, Indonesia. (JU PENG/XINHUA)

Upon arrival, Peng was welcomed by young local people playing in a gamelan, a traditional Indonesian orchestra. Iriana Joko Widodo received Peng warmly and posed for a photo with her.

Peng was accompanied by Iriana Joko Widodo during her visit to an exhibition of traditional Indonesian culture, art and craftwork, and talked to young local girls who welcomed her by preforming traditional pendet dance.

Peng said she appreciated the refinement of Bali's handmade silk work. She had tea with the Indonesian first lady, and the two engaged in casual conversation and listened to music.

Peng praised Iriana Joko Widodo for her enthusiasm in promoting public welfare, and spoke to her about China's policies and achievements in treating and preventing tuberculosis and HIV/AIDS.

Peng said she hoped that the two countries will enhance exchanges in the field of public welfare and work together to improve people's well-being.

Students of the Tourism Confucius Institute of Udayana University sang an Indonesian folk song in Chinese before Peng departed.

Praising the students' voices and expressing her appreciation for the musicians' accompaniment, Peng talked with the students about their studies and lives.

Someone among the students called out "mother Peng", and Peng responded with delight. Peng encouraged the students to continue to learn Chinese, and encouraged more young Indonesians to visit China, learn about the culture and become envoys for China-Indonesia cooperation.