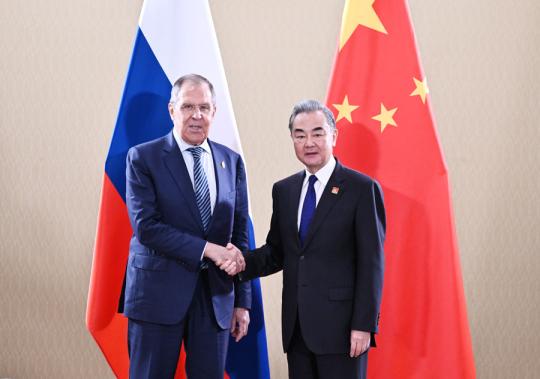 Wang Yi meets with Russian Foreign Minister Sergey Lavrov on the sidelines of the 17th G20 Summit in Bali, Indonesia, on Nov 15, 2022. (Photo/fmprc.gov.cn)

China has noted that Russia signaled interest in dialogue and agreed to resume the implementation of the Black Sea Grain Initiative, State Councilor and Foreign Minister Wang Yi said on Tuesday.

China will continue holding an objective and fair position and playing a constructive role in promoting peace talks on the Ukraine issue, Wang said when meeting with Russian Foreign Minister Sergey Lavrov on the sidelines of the 17th G20 Summit in Bali, Indonesia.

Wang, a member of the Political Bureau of the Central Committee of the Communist Party of China, elaborated on China's position on the issue, saying that "the four points" and "the four things" proposed by President Xi Jinping are the country's fundamental guidelines for addressing the issue.

In March, Xi proposed "the four points" in a virtual meeting with leaders of France and Germany about what must be done soon after the outbreak of the Ukraine crisis. During his talks with German Chancellor Olaf Scholz in this month, Xi put forward "the four things" that the international community must do together on the crisis.

Wang said China has noted that Moscow has recently reiterated its long-standing position that nuclear war cannot be won and must never be fought, which has shown Russia's rational and responsible attitude.

At the meeting, Wang expressed China's willingness to work with Russia to coordinate high-level exchanges and exchanges in various fields, deepen practical cooperation and facilitate exchanges of personnel.

He also stressed that China would resolutely advance a multipolar world, support democracy in international relations, and uphold the international system with the United Nations at its core, together with Russia and other like-minded countries.

Lavrov, for his part, said Russia always maintains an open attitude toward dialogue and negotiation on the Ukraine issue.

Russia will join forces with China to further consolidate the sound momentum of high-level exchanges, maintain the continuity of a comprehensive strategic partnership of coordination, and fully unlock the potential of Russia-China relations, he added.

The two sides reaffirmed their commitment to strengthening communication and coordination under multilateral frameworks such as the Shanghai Cooperation Organization and BRICS.

They also exchanged views on the situation in the Asia-Pacific region, the Korean Peninsula issue, and the Iran nuclear issue, among others.