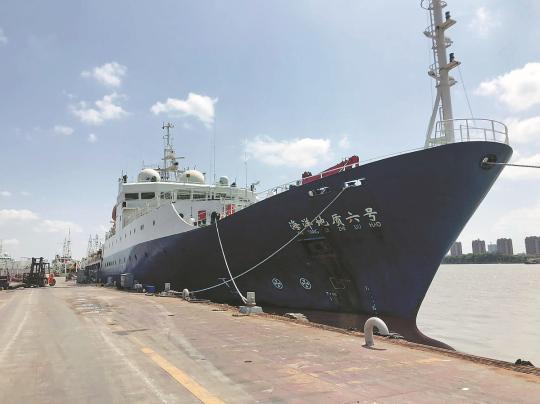 As Hong Kong marine scientist Ivy Cheng Aifang stared at computer monitors, an operator by her side carefully pushed forward a joystick under Cheng's instructions.

Almost instantaneously, some 1,400 meters beneath the sea surface, a robotic arm quietly advanced, placing deep-sea mussels and sea anemones it gathered in a preservation device.

It was the first time that Cheng had worked with this sophisticated equipment aboard the 5,000-metric-ton scientific research vessel Haiyang Dizhi 6 (Ocean Geology No 6), which was making a voyage to China's Xisha Islands in the South China Sea, about 600 kilometers from Hong Kong.

Cheng, a research assistant professor at Hong Kong University of Science and Technology, or HKUST, was one of four Hong Kong scientists on the expedition, which was led by colleagues from the Chinese mainland.

As high-definition images were received from a camera attached to a remotely operated underwater vehicle, or ROV, Cheng and the other scientists in the vessel's cramped cabin were excited about the deep-sea samples they were about to receive.

Marine life and microbes that survive in the dark, oxygen-deficient and high-pressure depths of the sea have different characteristics from ordinary creatures, Cheng said.

She wants to study the marine life and microbes, and hopes to extract compounds from them that could be used to treat neurodegenerative diseases such as Alzheimer's.

Cheng said many deep-sea creatures begin to die, or experience stress when they leave their habitat, and both factors could lead to rapid changes in their bodily functions or protein structures. The preservation device, which acts like a refrigerator, can slow these processes and give scientists time to study such creatures and perform experiments on them in the ship's laboratory, she said.

The shorter the time between sample collection and experimentation, the more time there is for observation and discoveries, Cheng said. This is also why marine scientists need to take part in ocean research expeditions, rather than merely waiting for samples to be sent to onshore laboratories, she added.

During the trip, which lasted nearly one month, Cheng and her colleagues carried out six deep-sea missions to collect creatures by using the ROV, and conducted three experiments in the vessel's laboratory.