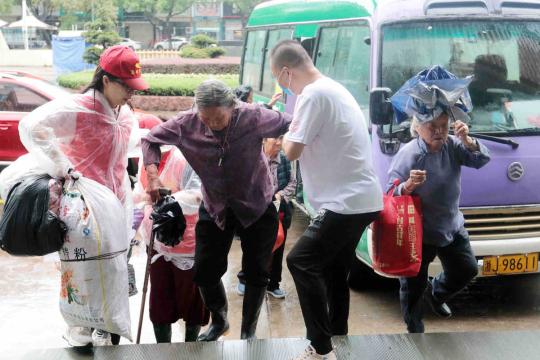 Elderly people arrive at a safe location in Wenling, Zhejiang province, on Wednesday, ahead of the landfall of Typhoon Muifa. Some 260 elderly people, who have been living at a temporary location while their properties are renovated, were relocated due to safety concerns. (ZHOU XUEJUN/FOR CHINA DAILY)

China's national observatory on Wednesday upgraded its typhoon alert to red, the highest level, as Muifa, the 12th typhoon this year, made landfall in Zhejiang province on Wednesday night and is expected to bring more winds and heavy rainfall to the Yangtze River Delta region.

According to the National Meteorological Center, Muifa made landfall around 8:30 pm in Zhoushan, Zhejiang, with winds up to 150 kilometers per hour. As it moves northwest, it is forecast to pass through Hangzhou Bay, and will make landfall once more between Zhejiang's Pinghu city and Pudong in Shanghai on Wednesday night. It will further move past Jiangsu and Shandong provinces as it weakens.

Affected by the typhoon, parts of Zhejiang have already seen intense downpours and more cities in the province have launched emergency responses for the typhoon and related flooding.

In Hangzhou, its typhoon alert was upgraded to Level II on Tuesday evening. The education bureau of Hangzhou released a notice on Wednesday saying that schools may allow students to postpone going to school or that they can leave school early to ensure the safety of teachers and students from Wednesday to Thursday.

Torrential rains and strong winds are expected to hit the coastal area of Shanghai from Wednesday afternoon to Thursday morning, Shanghai Flood Control Headquarters said during an emergency conference on Tuesday night. 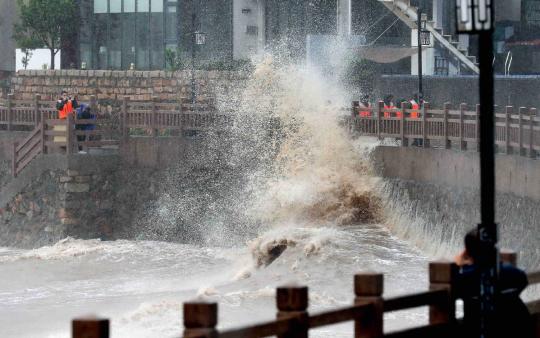 The headquarters has advised people to make emergency preparations for the typhoon to avoid casualties or property damage and urged different departments to make arrangements for a post-disaster resumption of production.

Due to the typhoon, Wuxi in Jiangsu province suspended flights at its Sunan Shuofang International Airport from 6 pm Wednesday to 6 pm Thursday. The airport suggested that passengers not travel to the airport until their flights have resumed.

The Suzhou and Wuxi transportation departments have also suspended the operation of ships on Taihu Lake, China's third largest freshwater lake, from 5 pm Tuesday until the influence of the typhoon subsides.