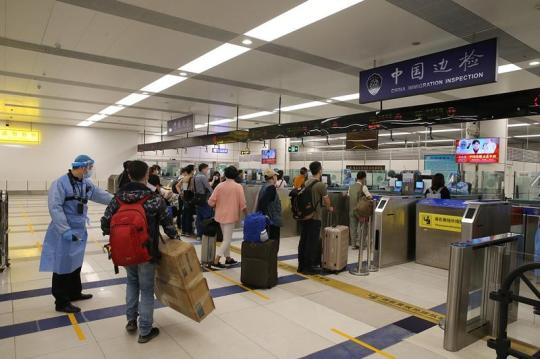 People line up at the Shenzhen Bay checkpoint on Nov 24 to enter the Chinese mainland. (Photo provided to China Daily)

The announcement came after Lee met online with high-ranking officials from Guangdong province and reached a preliminary consensus on the issue.

At a news briefing after the talk, Lee said the "reverse quarantine" plan is one of the steps the Hong Kong Special Administrative Region government is taking to resume the regular flow of people from the city to Shenzhen, Guangdong province, while alleviating the burden on hotels on the mainland.

Under the new program, those heading to Guangdong will be quarantined at facilities in Hong Kong, and then be transported to the mainland under a closed-loop arrangement.

One of the possible facilities is the 10,000-plus-bed community isolation and treatment facility in Lok Ma Chau Loop built by the central government, as it was built for isolation with good conditions for this purpose, Lee said.

All requirements for the quarantine in Hong Kong, including the techniques and standards for COVID-19 testing, will align with those of the mainland, Lee said.

Currently, people in Hong Kong who travel to the mainland need to undergo a seven-day quarantine in a mainland hotel after their arrival, followed by three days of health monitoring at home.

Hong Kong travelers need to reserve an isolation hotel room via an online system before crossing the border. The room quota has been limited to 2,000 a day.

Lee also said a task force led by Chief Secretary for Administration Chan Kwok-ki will work closely with the Shenzhen government to implement the arrangement as soon as possible. He also thanked the authorities of Guangdong and Shenzhen for supporting the proposal.

The arrangement came as Hong Kong has seen a significant rebound in COVID-19 cases.

For the first time in five months, the city recorded over 10,000 infections in a single day, with a total of 10,586 cases being reported on Thursday.

The number of daily cases has hovered at around 8,000 over the past few days.

Lee said the worsened COVID-19 situation is not only a threat to vulnerable groups like children and seniors, but also to the city's public health system, which has to curtail some non-emergency services to focus on treating COVID-19 patients.

Lee called on the community to work together to curb the outbreak so that he could carry out more measures to facilitate cross-border travel.

Community leaders welcomed the "reverse quarantine" plan as it can help more travelers cross the border and make full use of local facilities.

Hong Kong lawmaker Edward Leung Hei said the current quota of 2,000 for entering the mainland was not enough to meet the huge demand for travel in Hong Kong.

The online meeting also touched on strengthening the collaboration mechanism between Hong Kong and Guangdong by establishing 13 task groups in areas such as anti-pandemic controls and cross-boundary travels, the Northern Metropolis plan put forward by Hong Kong, and innovation and technology.

To deepen cooperation between Hong Kong and Shenzhen, the officials also agreed to reshuffle the task groups into 19 groups covering the Qianhai special economic zone, the connectivity of infrastructure and youth development.

The meeting was attended by the provincial leaders of Guangdong and the city leaders of Shenzhen and Guangzhou.