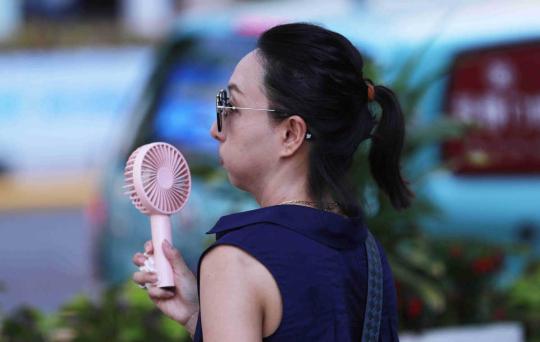 A woman walking on a hot city street in Shanghai tries to cool off with a mini-electric fan on Thursday. (TANG YANJUN/CHINA NEWS SERVICE)

Despite arrival of autumn, summer scorcher continues across country

The number of days classified as "extremely hot" in Shanghai this year rose to six on Thursday, breaking the number for extremely hot days in a year in the city since it started keeping records in 1873.

A heat wave has persisted in Shanghai and many regions along the Yangtze River, and it's not likely to ease up much over the coming week.

Despite a thundershower on Thursday afternoon, the Shanghai Meteorological Center recorded a temperature of 40.6 C.

China's national observatory on Thursday issued an orange alert for high temperatures as an intense heat wave lingers in multiple regions of the country. China has a four-tier, color-coded weather warning system, with red representing the most severe warning, followed by orange, yellow and blue.

Due to strong subtropical high pressure, the heat wave will continue to scorch cities in the Yangtze River Delta in the coming days, according to the National Meteorological Center, and temperatures in parts of Shaanxi, Hubei, Sichuan, Chongqing, Jiangsu, Anhui and Zhejiang may surpass 40 C.

In Nanjing of Jiangsu province, the city's emergency center said there were 172 cases of heatstroke from Aug 1 to 9, with most cases happening around 2 pm. The center advised the public to avoid outdoor activities and suggested construction workers, couriers and nucleic acid testers shorten their exposure to high temperatures.

A lack of rainfall has led to the fall in the water level in Dongting Lake in Hunan from the summer average of 29.88 meters to 24.22 meters at its exit monitoring station in Chenglingji, according to Hunan Daily.

Hangzhou, Zhejiang province, has seen 23 continuous days with high temperatures over 35 C with the heat wave forecast to remain for the next week, which is expected to set a new city record for the most consecutive days with such highs. The current record was 26 days in a row with highs above 35 C set in 2004.

Upstream of the Yangtze River, Chongqing municipality has also been scorched by prolonged heat with temperatures hitting over 40 C in the past three days.

The Xinjiang Uygur autonomous region also experienced extremely high temperatures. Such hot weather can last as long as four months in the Turpan Basin, with an average daily temperature of over 31 C.