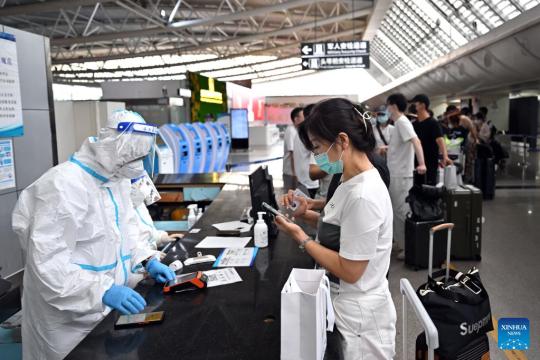 Nanjing, Jiangsu province, helped to charter a flight on Thursday to bring home the first group of its residents who have been stranded by the COVID-19 outbreak in distant Hainan province.

The 228 tourists, who arrived in Nanjing around 5 am, will be quarantined for three days for free in designated hotels, followed by four days of home isolation.

The tourists from Nanjing were among an estimated 80,000 tourists stranded by a new outbreak of the epidemic in Hainan's coastal resort city of Sanya.

As the new outbreak in Sanya continued, 480 new confirmed cases and 774 asymptomatic carriers were recorded on Wednesday, officials said at a news conference on Thursday.

With support from testing teams that gathered from across the country, nucleic acid test samples were processed rapidly, leading to a jump in daily confirmed cases and asymptomatic carriers on Wednesday, said Jin Yuming, chief expert with the Hainan Center for Disease Control and Prevention.

As of 4 am on Thursday, Sanya had co-arranged for 2,156 tourists stranded by the island's latest outbreak to return home to Xi'an, Shaanxi province; Chengdu, Sichuan province, Nanjing, Jiangsu; and Shanghai and Tianjin, said Sheng Yongjun, executive vice-mayor of Sanya. The epidemic left around 80,000 tourists stuck in the popular resort city.

More arrangements for return journeys are being made for tourists who pass health checks. A system for handling applications for return tickets has been operating on Wednesday. Foreign tourists who have a Hainan health code can apply for departure, while those without a code can have others apply for their departure through the system, said local officials.

Instead of staying at hotels and waiting, many stranded tourists have volunteered to join local anti-epidemic efforts.

Tao Kun, an orthopedic physician from Shanghai, was among the volunteers. "This trip to Hainan was unforgettable," Tao was quoted as saying by The Paper on Thursday.

Tao and his family had a happy, weeklong holiday, and their child learned how to snorkel and surf. The return journey was interrupted at the Sanya airport on Saturday when the city imposed a temporary lockdown to cope with the new outbreak.

Together with other tourists stranded at the airport, the Tao family was transferred and settled into a hotel later Saturday. Tao said he was grateful for the arrangements made by the Sanya government.

"I have experienced the epidemic in Shanghai and know the importance of prevention. Keeping tourists first in isolation for observation in Sanya is the best way to minimize the impact and reduce the risk of it spreading to other cities in China," Tao said.

On Thursday, Shigatse, Tibet, began another three days of "static management", under which employees of companies and government bodies are required to work from home and operations of entertainment places are suspended. During this time, tourists stranded in urban areas can live at hotels and family inns for free, with the local government covering the expense.