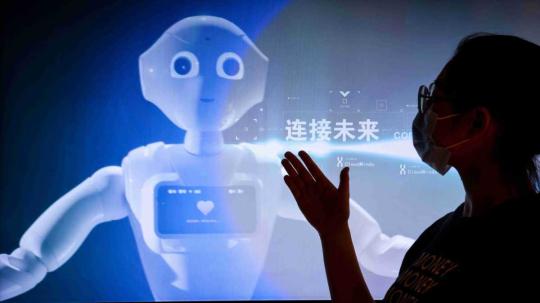 As 5G becomes an important force in reshaping the media, the sector should make greater efforts to leverage digital technologies to create content that is more interactive, mobile and visual in terms of its international impact, experts said on Tuesday.

The comments were related to China's creation of the world's largest 5G network, which lays a strong foundation for the pioneering application of cutting-edge technologies, such as virtual and augmented reality, that can be used in mass communication.

Du Zhanyuan, president of the China International Publishing Group, said the technological revolution made possible by 5G has become an important force in reshaping the media and public opinion.

Information infrastructure has always been a major factor in international communication, and the country with the most advanced communication technology is more likely to influence trends of global communication, Du told a forum at the 2022 World 5G Convention in Harbin, Heilongjiang province.

As of June, China's 5G network was spread across 1.85 million base stations and had 455 million mobile subscribers, according to the most recent data from the Ministry of Industry and Information Technology.

He Liangjun, a member of the Standing Committee of the Communist Party of China Heilongjiang Provincial Committee and head of the committee's publicity department, said the media was among the first sectors transformed by 5G.He said that communication applications powered by 5G can create an immersive media experience for users, which would surely have a positive and far-reaching impact on business models and many other aspects of life.

Sun Shangwu, deputy editor-in-chief of China Daily, said 5G's large bandwidth, low latency, reliability and wide connection, will enable it to promote reform and innovation in every industry once wireless technology is intertwined and added that 5G will also inject new vitality into international communication, and help create a beautiful new vision for global exchange.

"In the 5G era, the rate of information transmission means that videos will replace words as the main form of communication," Sun said.

He believes that China Daily will grasp the trend of increasingly intelligent and data-driven human-machine collaboration to create more informative, ultrahigh-definition videos for international communication as part of its broader push to show a real, three-dimensional and comprehensive image of China.

"The combination of 5G and artificial intelligence means that we will have a more immersive, smarter and more connected future, which will further reshape the media industry," said Hou Mingjuan, global vice-president of semiconductor chipmaker Qualcomm.

The media is just one sector undergoing great change as a result of 5G. Currently, more than 2,400 5G industrial internet projects are underway in China, with wireless technology applied to a wide range of sectors including transportation, mining, medical care, education, culture and tourism, according to data from the Ministry of Industry and Information Technology.

The industrial internet refers to the convergence of industrial systems and advanced computing, analytics, sensing and new levels of connectivity.

Zhao Houlin, secretary-general of the International Telecommunication Union, said earlier that China's consumer internet and industrial internet, powered by 5G, have entered the fast lane, making China one of the leaders in global innovation and development.