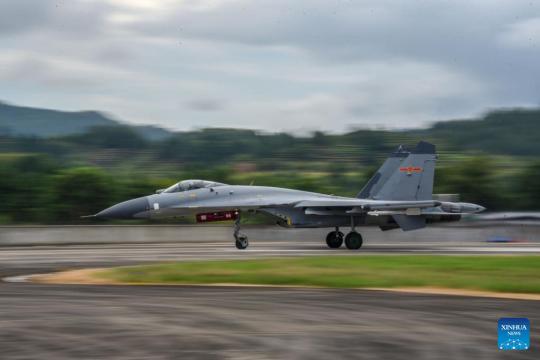 A warplane of the Eastern Theater Command of the Chinese People's Liberation Army (PLA) takes off during joint combat training exercises around the Taiwan Island, Aug 7, 2022. (Photo/Xinhua)

China's countermeasures against the United States in the law enforcement and judiciary sectors are justified, and the U.S. should take full responsibility for damaging the foundation of bilateral cooperation in these sectors, experts and analysts said.

The Foreign Ministry announced eight countermeasures on Friday in response to U.S. House Speaker Nancy Pelosi's visit to Taiwan, which was made despite China's strong opposition and serious representations over the trip.

The countermeasures include the suspension of bilateral cooperation on the repatriation of illegal immigrants and legal assistance in criminal matters and cooperation against transnational crimes and in the area of counternarcotics.

Huang Jin, deputy head of the China Law Society, said cooperation in those areas was established based on bilateral memorandums and does not involve international treaties and agreements.

"The establishment of the cooperation needed plenty of time and efforts from both sides in negotiation. Since the two sides have the will to cooperate, then both sides need to show their sincerity," Huang said. "Pelosi's visit to Taiwan undermined the basis of China-U.S. cooperation in these areas, making it hard to carry on. It's justified to suspend cooperation on the basis of safeguarding China's national sovereignty."

He said that China's decision to suspend cooperation was made after weighing the matter carefully. Problems in drug trafficking, immigration, transnational crime and the judicial field are where the U.S. needs more support from China.

At the same time, these measures serve as a warning to other countries that want to maintain ties with China while following the U.S. in inappropriate moves, he added.

The countermeasures are a justified reaction taken by the Chinese government against the gross interference by the U.S. in China's Taiwan affairs. The U.S. caused serious damage to China's sovereignty and territorial integrity, and the measures implement a holistic approach to national security and firmly safeguard national security and core interests, said Chen Xiangyang, director of the Office of the Research Center for Overall National Security Outlook.

The countermeasures showed that China-U.S. relations are deteriorating, and the blame lies entirely with the U.S. side.

The behavior of the U.S. includes Pelosi's visit to Taiwan and her association with "Taiwan independence" forces, the U.S. government's repeated shirking of its responsibilities for Pelosi's visit and even making accusations against China's countermeasures and threatening China's core interests, said Chen.

Taking the anti-narcotic moves as an example, the suspension of China-U.S. anti-drug cooperation could affect the fight against transnational drug crimes. It has a greater impact on the U.S., as its drug abuse problems are far more serious, he added.

China put the whole category of fentanyl substances under control in May 2019 as a measure to fight against drug crimes.

Instead, the U.S. included the Institute of Forensic Science of China's Ministry of Public Security and the National Narcotics Laboratory, which are both important institutions responsible for the detection and control of fentanyl substances, to its "entity list" for sanctions in May 2020.

Resuming cooperation will depend on how the U.S. behaves on issues concerning China's core interests such as the Taiwan question, and whether the U.S. respects China's national dignity and interests, Chen said.