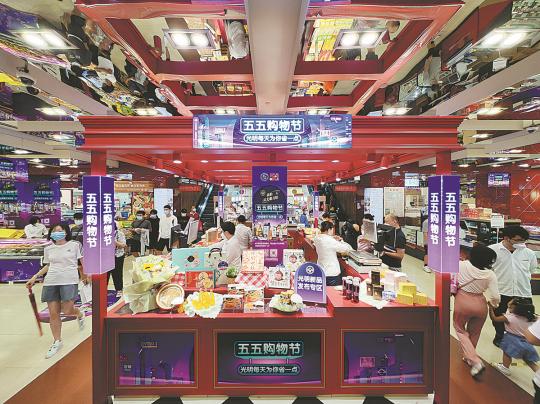 China should resolutely implement macroeconomic policies to stimulate demand and stabilize growth as social demand has not yet been fully unleashed in the short term, economists said.

China's top leadership stressed that macroeconomic policies should play an active role in expanding demand, and fiscal and monetary policies should effectively make up for the lack of social demand, according to a statement issued after a meeting of the Political Bureau of the Communist Party of China Central Committee on July 28.

Domestic demand can be expanded through accelerated implementation of key projects. As of July 28, China had issued 3.47 trillion yuan ($513.8 billion) of special-purpose local government bonds, accounting for 95 percent of the combined full-year quota of such bonds.

"Local governments should expedite the approval and the implementation of key projects for the next step so that the projects will play a leading role in boosting investment and consumption as soon as possible," Lian said.

He said China may front-load the 2023 special-purpose bond quota, which could play a role in expanding domestic demand during the fourth quarter of this year.

Tian Xuan, associate dean of Tsinghua University's PBC School of Finance, said what is important for boosting demand in the second half is to highlight the implementation of targeted macroeconomic policies.

In terms of the monetary policy, China should focus on quality small and medium-sized enterprises that are in a difficult situation and smooth the mechanism of the adoption of targeted measures.

In terms of the fiscal policy, the country should speed up the implementation of major investment projects outlined in the 14th Five-Year Plan (2021-25) and accelerate approval of "new infrastructure "and new energy projects, Tian said.

China's monetary policy should seek to ensure reasonably sufficient liquidity, credit to businesses should be boosted, and new loans from policy banks and investment funds for infrastructure construction should be better leveraged, the meeting said.

Wen Bin, chief economist at China Minsheng Banking Corp, said, "We expect that the monetary policy will continue to maintain continuity, and China will intensify credit easing mainly through new loans from policy banks and investment funds for infrastructure construction."

With a registered capital of 30 billion yuan, the infrastructure fund company of CDB granted nearly 1.31 billion yuan on July 22 to support the construction of a section of the Hohhot-Beihai Expressway in Shanxi province and an airport in Anyang, Henan province.

ADBC's infrastructure fund company has a registered capital of 10 billion yuan. It granted 500 million yuan on July 21 to support the construction of a pumped storage power station in Yunyang county, Chongqing, to leverage water infrastructure investments.

Yu Xiangrong, China chief economist at Citigroup, said: "The government will comprehensively broaden infrastructure financing through channels like fiscal policies and policy banks. We expect that China's full-year infrastructure investment will increase by 7.7 percent year-on-year, up from 0.4 percent last year, and the growth rate will remain at around 5 percent in 2023."

Infrastructure investment is becoming a strong foothold for China to stabilize growth. As traditional infrastructure is still underdeveloped and has weak links due to its unbalanced growth, industrial upgrade and transitions to greener energy need large-scale "new infrastructure" investment, Yu said.