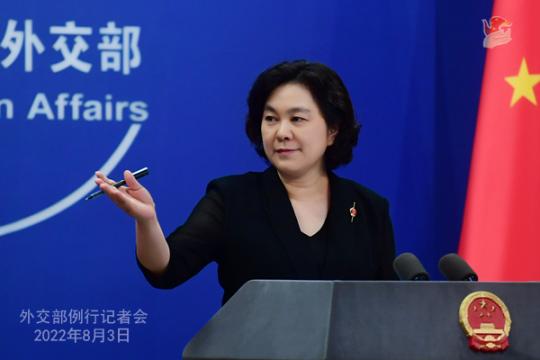 China has unveiled a number of countermeasures in response to United States House Speaker Nancy Pelosi's provocative Taiwan visit, which analysts said will heighten tensions across the Taiwan Straits and further worsen the deteriorated China-U.S. ties.

The measures include staging military drills near Taiwan, conducting large-scale air and naval activities, punishing organizations related to die-hard "Taiwan independence" elements, and suspending natural sand exports to Taiwan as well as the imports of some farm produce from the island.

Speaking at a regular news conference on Wednesday, Foreign Ministry spokeswoman Hua Chunying said that all of the countermeasures will be "forceful, effective and resolute" and both the U.S. and "Taiwan independence" forces will feel them gradually and in a sustained way.

Shortly after Pelosi's arrival in Taipei on Tuesday night, Vice-Foreign Minister Xie Feng summoned U.S. Ambassador to China Nicholas Burns to protest the U.S. House speaker's visit to the island, stressing that the nature of Pelosi's visit is vicious and the consequences are very grave.

Qin Gang, Chinese ambassador to the U.S., lodged stern representations with and strongly protested to the U.S. on Tuesday over Pelosi's visit, which he blasted as "reckless and provocative".

China firmly urges the U.S. to stop playing the "Taiwan card" and using Taiwan to contain China, immediately correct its mistake, manage and eliminate the pernicious impact of Pelosi's visit, and refrain from further dangerous and provocative moves infringing on China's sovereignty and security, Qin said.

Pelosi, the second in line to the U.S. presidency, concluded the highest-level visit in 25 years by a U.S. government official to Taiwan on Wednesday afternoon. During her stay in Taipei, she visited the legislature of the island, and met with Taiwan leader Tsai Ing-wen, as well as some "human rights activists".

State Councilor and Foreign Minister Wang Yi said Pelosi's visit to Taiwan was "a sheer farce" and that it would not alter the international consensus on the one-China principle, nor the historical trend that Taiwan will return to the motherland.

In a statement on Wednesday, Wang said the visit proves once again that some U.S. politicians have become "troublemakers" in China-U.S. relations, and that the U.S. has become the "biggest destroyer" of peace across the Taiwan Straits and of regional stability.

"I want to stress that the one-China principle is the key stabilizing force for peace and stability across the Taiwan Straits, and the three China-U.S. joint communiques are the real 'guardrails' for peaceful coexistence between China and the United States," Wang said.

Clinging to the U.S. to seek "independence" is a dead end, and attempts to use the Taiwan question to contain China are doomed to failure, he added.

Experts said that the huge uncertainty surrounding Pelosi's visit to Taiwan has summed up the intensely volatile nature and unpredictability of China-U.S. relations. It will also contribute to the instability of the Asia-Pacific region, as Taiwan has become by far the most dangerous source of tension and conflict.

Chen Bing, a Chinese media commentator, said that Pelosi's visit to Taiwan was a serious political incident that has harmed China-U.S. relations and might also lead to military confrontation between the two major countries.

China will undoubtedly step up reunification efforts, and respond to external interference on the Taiwan question with more effective means in order to safeguard its sovereignty and territorial integrity, he said.

William Jones, a former White House correspondent for Executive Intelligence Review and a non-resident fellow of the Chongyang Institute for Financial Studies at Renmin University of China, said that the Asia-Pacific situation has changed radically due to the shortsighted zeal of an overly ambitious politician.

"One can only hope that wiser heads in the American political establishment can bring to bear their influence on a situation that is in danger of spinning out of control," Jones said.

Leaving Taiwan, Pelosi flew to South Korea, part of her Asian tour which has taken her to Singapore, Malaysia and will also see her visit Japan.

Before Pelosi's trip to Japan, a spokesperson for the Chinese embassy in Japan on Tuesday condemned her visit to Taiwan, saying the Taiwan question concerns China's core interests and is also related to the political foundation of Sino-Japanese ties.

The spokesperson urged Japan to abide by its commitment to China on the Taiwan question as well as the principles of the four political documents between China and Japan and properly handle the Taiwan question and avoid sending the wrong signal to "Taiwan independence" forces.

Also on Tuesday, Chinese Ambassador to the United Kingdom Zheng Zeguang condemned Pelosi's visit, and urged the UK "not to dance to the tune of the U.S. and follow in the wrong footsteps of the U.S.". Both China and the UK can see the benefits of having a productive and constructive relationship, he added.