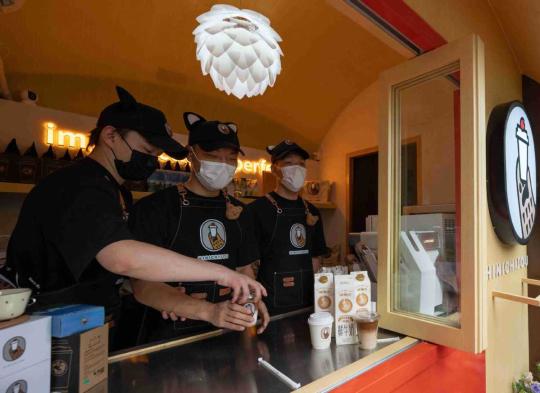 Wang Tian, one of the founders of Bear Paw Cafe, a cafe that went viral online in 2020 for its coffee being served by a bear claw poking out of a hole in the wall, with most staff hearing impaired, didn't expect the planned opening of his next store to be met with such fanfare.

Wang's latest offering again combines the employment of people with disabilities and serving up fresh brews.

Seed Shop, a new branch of Bear Paw in Pudong district's Times Square, is shaped like an acorn and its baristas include blind brothers Yin Tianbao and Yin Tianyou.

Even before the small cafe's opening, word spread online and interest quickly grew.

"We received many messages beforehand from organizations that care for the disabled and social welfare organizations. They said they would come to the grand opening to support the blind brothers. About 2,000 people were expected to attend the opening event," Wang said.

And so, he instead opted for a quieter soft opening for the brothers, fearing a crowd gathering would increase the risk as the city continues to struggle with COVID-19.

It has long been a dream of Wang's to empower people with disabilities, and after the success of Bear Claw Cafe, the keen entrepreneur set about his next endeavor, this time seeking to employ people with vision impairment.

Several challenges had to be faced by both Wang and his blind employees, that is, training the boys on how to make great cups of coffee and finding equipment that can be safely used by the visually impaired.

Yin Tianbao, born blind and in his early 20s, is the manager of the cafe. To get himself up to speed for the cafe's opening he practiced making over 100 cups of coffee every day.

"There is no other way but to practice over and over again," Yin Tianbao told China Daily.

"Training muscle memory is easier said than done," he said.

He recalled wanting to give up many times, but, having been given 10 percent of the business, he persevered.

It paid off, and he can now make a great cup of coffee in two minutes and has even mastered making latte. He inspired his twin brother Yin Tianyou to follow in his footsteps and become a barista too.

"Coffee-making has shown me that I need to be bold and be willing to try new things. Success comes from failure. If I can succeed in this, maybe I can succeed in many other things," Yin Tianbao said.

Their coffee-making has been made possible by the donation of a specially customized coffee machine developed for the twins. The machine, made by Italian coffee equipment brand Rhea Vendors, features buttons in different shapes in order to help the blind navigate its operation.

"The customized coffee machine helps me a lot, otherwise, there may be few cups of good coffee," said Yin Tianbao.

According to statistics of the China Disabled Persons' Federation, the total number of people with disabilities nationwide has reached 85 million, including 17 million people with visual impairment.

Wang said that despite there being many people with visual impairments wanting to work, there are very few opportunities for them out there apart from work as massage therapists or phone operators.

"Therefore, I wondered if I could help them find a job or start up their own business to give them more options for employment," Wang said. So far, about 80 percent of his employees across nine stores have disabilities.

According to Wang, the new cafe was developed through discussions with Yin Tianbao, aiming to provide a convenient environment and suitable equipment for employees with disabilities.

According to Wang, the Seed Shop can be used as a template for others and potentially rolled out at other locations across the country.

If there are blind people who want to be baristas, Wang and his team are willing to give free training here in Shanghai and then produce identical stores and transport them to other cities where the blind baristas want to start their businesses.

"Most of the designs were based on my ideas. They had many discussions with different teams and designed the store specifically to meet my needs," Yin Tianbao said.

The Yin brothers and their new shop have already won the hearts of the neighborhood, with locals regularly lining up for a fresh cuppa.

"A cup of coffee doesn't do justice to the amount of effort they have to put in," said customer Li Xiaoxing.