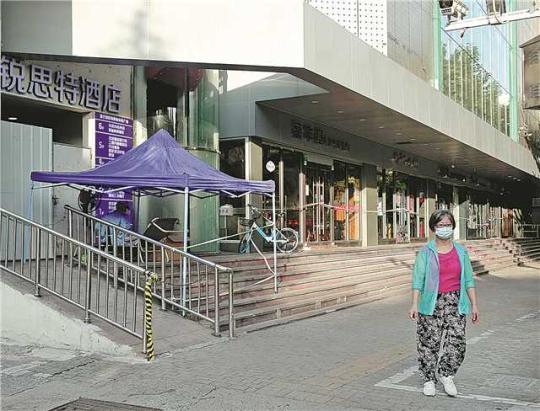 Venues are closed on Lanxi road in Putuo district, Shanghai, due to COVID-19 on Wednesday. (GAO ERQIANG/CHINA DAILY)

Karaoke bars in Shanghai have been ordered to close following a spike in new COVID-19 infections linked to such venues, local authorities announced on Wednesday.

Other entertainment businesses that operate within enclosed spaces such as escape and board game rooms have also been reminded to strictly enforce epidemic prevention measures when they reopen or risk being shut down.

The city reported 24 locally transmitted COVID-19 cases on Tuesday, 15 of which were asymptomatic. Two places where the cases live and had visited have been designated as high-risk areas. Another 22 locations linked to these cases have been classified as medium-risk areas.

According to Zhao Dandan, deputy director of the Shanghai Health Commission, all the cases, along with infections added on Sunday and Monday, were related to a KTV venue and a board game room on Lanxi road in Shanghai's Putuo district.

Both the KTV and the board game venue have been fined and have had their licences revoked for failing to implement disease prevention protocols, according to a statement from Putuo district.

Jin Lei, deputy director of Shanghai Culture and Tourism Bureau, noted that it is still too risky to allow entertainment venues where people gather in enclosed spaces to reopen. He added that the bureau has been coordinating with local departments to conduct assessments on COVID-19 prevention and control in entertainment venues.

Since July 1, 25 art galleries, 29 museums and 84 A-level scenic spots in the city have reopened to the public.

Authorities have also approved the gradual reopening of performance venues and cinemas starting on July 8, according to Jin.

"We'll strengthen inspections for reopened places so they can provide a comfortable and safe cultural and tourism environment for citizens," he added.

Local authorities have also issued favorable policies to help enterprises get through these tough times. For example, 50 billion yuan ($7.46 billion) in credit will be offered to eligible cultural and tourism enterprises.