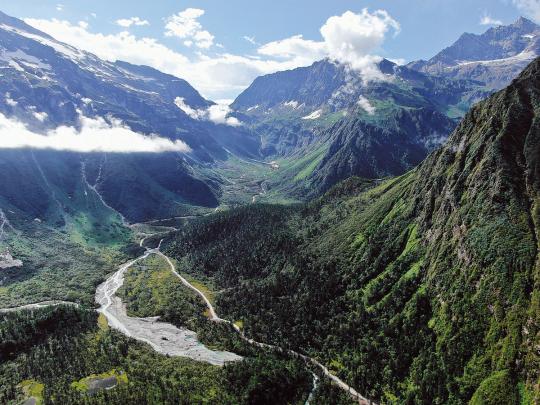 An aerial photo shows part of the Metog-Pai Highway in the Tibet autonomous region, which is under construction and is expected to open later this year. (DONG ZHIXIONG/XINHUA)

Nyima will always remember the hardship he and his fellow villagers endured when his home county was isolated from the outside world because there were no proper roads.

Nyima is from a village in Metog, a remote county deep in the Himalayas in the Tibet autonomous region. He is a member of the Monba ethnic group, one of the smallest in China.

In the past, because of its isolation, people from Metog were forced to climb over snow-covered passes to neighboring towns to buy necessities and had to trek for a week to reach Nyingchi, the prefectural city, in search of education, medical treatment and job opportunities.

"A round trip between Metog and the nearest town would take villagers seven days in the past," Nyima said.

At an altitude of 1,200 meters, which is much lower than the average regional altitude of 4,000 meters, Metog is humid and rainy. Its name means "flower" or "lotus flower" in Tibetan, which is why it is also known as the "sacred valley of the lotus".

The county is surrounded by mountains and is home to everything from alpine zones to tropical rainforests. Farmers have grown rice, corn, finger millet and other crops for generations.

Because of the lack of roads connecting it with the outside world, people were either forced to walk or ride their livestock in the past.

The county is also located on one of the Himalaya's fracture zones. Natural disasters like landslides, mudslides, avalanches and floods occur frequently, and access to the county could be blocked for as long as nine months a year in the past. 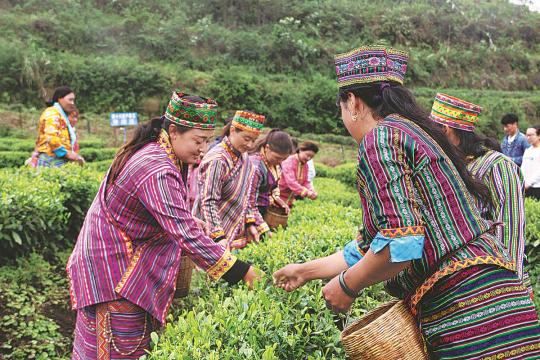 With an investment of more than 2 billion yuan, work on the second county-level road project between Metog and Pai township in Manling county began in 2014. It should be completed by September.

Tibet has invested heavily in rural road projects, spending 94 billion yuan on their construction during the 13th Five-Year Plan (2016-20) period, according to the region's Traffic and Transportation Department. "This investment paid for more than 3,000 road projects, and more than 38,000 km of rural roads were renovated or built during the period," said Feng Zhenzhong, an official with the department.

Thanks to heavy investment, the rural road network extended more than 90,000 km by the end of last year, he added. Between 2016 and 2020, Tibet's 280 townships and 2,974 villages were linked by paved roads. Now, 94 percent of its townships and 77 percent of its villages are connected by roads.

As passenger bus services in rural areas have increased, the region now has 317 rural passenger lines. With 369 shuttle buses operating in rural areas, 74 counties are now linked by services.

"During the next few years, we will continue to build better roads, operate more passenger lines, and provide faster and more convenient logistic services in rural areas," Feng said.

"We will strive to ensure all the region's townships and more than 90 percent of its villages have access to paved roads by 2025."