CPC carries on mission to promote progress of humanity 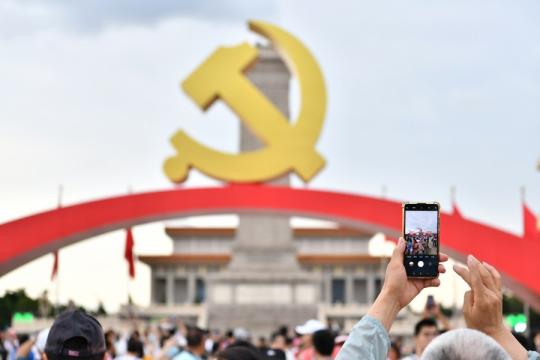 A man takes photos of the decoration set up for the ceremony marking the 100th anniversary of the founding of the Communist Party of China at Tian'anmen Square in Beijing, July 3, 2021. (Photo/Xinhua)

As some countries work to create division and confrontation in the world to maintain hegemony for their own interests, China, led by the Communist Party of China, is trying to steer the course of the giant ship of humanity toward peace and development.

With promoting human progress being part of its founding mission, the century-old CPC is leading China in working with countries around the world to address the challenges today's world is facing by implementing the Global Development Initiative and the Global Security Initiative, both proposed by Xi Jinping, general secretary of the CPC Central Committee.

Friday marks the 101st anniversary of the founding of the CPC. As the world's largest ruling political party, the CPC has been growing as it pursues its mission to promote human progress while working to seek happiness for the Chinese people and realize national rejuvenation.

By the end of 2021, the Party had around 96.71 million members, up over 3.43 million from the previous year, according to statistics released on Wednesday by the Organization Department of the CPC Central Committee.

Wang Qiaorong, a researcher at the Institute of Contemporary China Studies at the Chinese Academy of Social Sciences, said that over the past century, the CPC has been committed to upholding world peace and promoting common development.

With a global vision, the CPC has paid great attention to human destiny over the past century, kept abreast of the trend of human development, adapted itself to changes in the international landscape and properly dealt with its relations with the rest of the world by coordinating the development of the domestic and international situations, Wang said.

Pursuing peaceful development and promoting fairness, justice and win-win cooperation to advance the building of a community with a shared future for mankind are underlying principles of the CPC's international strategy, Wang added.

The CPC has made it clear that the strength of a powerful political party or a powerful country lies in its open mind, broad vision and great sense of responsibility, rather than its size and muscle. It also advocates that peace, cooperation, dialogue and openness, rather than war, hegemony, confrontation and seclusion, represent the correct and the only path to a better future for humanity.

As the Party enters its next century with the mission of realizing national rejuvenation and building China into a modern socialist country, the world has once again arrived at a crossroads. Countries around the world face common challenges arising from the COVID-19 pandemic, the Ukraine crisis, rising unilateralism and protectionism, slow economic recovery and setbacks in global development.

"Where is the world headed: Peace or war? Progress or regression? Openness or isolation? Cooperation or confrontation? These are choices of the times that we are confronted with," Xi said when delivering a speech at the opening ceremony of the BRICS Business Forum on June 22.

With the development of the international situation in mind, Xi proposed the Global Development Initiative at the United Nations General Assembly session in September. He called on all countries to implement the 2030 Agenda for Sustainable Development, and establish a united, equal, balanced and inclusive global development partnership.

As the Ukraine crisis loomed large, Xi proposed the Global Security Initiative in April, urging all countries to remain committed to the vision of common, comprehensive, cooperative and sustainable security.

Abhishek G. Bhaya, a journalist and international affairs commentator, said that in contrast to the US "Indo-Pacific" strategy that reeks of an archaic Cold War mentality, China's Global Security Initiative is for the public good as part of its long-stated vision of building a community with a shared future for mankind.

It is clear that China is well-entrenched as a reliable economic and security partner in the Asia-Pacific region, while recent US policies are likely to foment trouble and security challenges in the region, Bhaya said.

"Between the two competing visions for maintaining peace and security in the Asia-Pacific, the choice couldn't be more obvious."

While chairing the virtual dialogue meeting, Xi cited his experience as a farmer in a small village in Shaanxi province in the late 1960s and the dramatic changes experienced by the area's residents in the past decades, saying that only through continuous development can the people's desire for a better life and social stability be realized.

Carlos Watson, representative of the UN Food and Agriculture Organization to China, said that a closer look at the GDI indicates that it shares pillars similar to the SDGs as it focuses on the planet, people, prosperity, peace and partnerships. "The FAO welcomes the GDI because we are encouraging all member states to join hands on this final stretch of final sprint to reach our common goal."