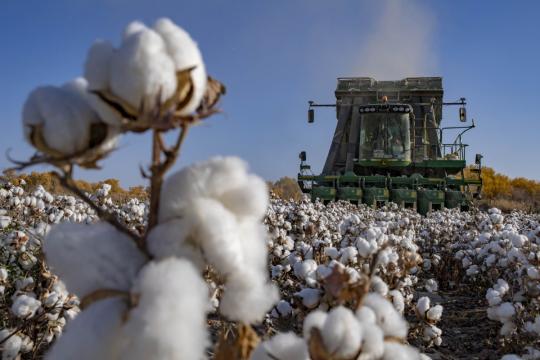 Xinjiang strongly condemns and firmly opposes the United States' "Uyghur Forced Labor Prevention Act", said a spokesman for the Uyghur autonomous region's government on Friday, adding that the act would seriously undermine the stability of international industrial and supply chain.

"It's an upgrade of the U.S.‘ crackdown on China under the pretext of human rights," said spokesman Xu Guixiang at an online news conference.

Under the act, which passed at the end of 2021 and will take effect on Tuesday, U.S. Customs and Border Protection will block all imports made wholly or partly in Xinjiang, citing "forced labor" as the reason. Importers should prove to authorities with "clear and convincing evidence" that the goods are not produced by "forced labor" should they want to resume the imports, according to the customs and border agency.

The U.S.' move would seriously harm the enterprises and consumers of both China and the U.S., the world's two largest economies, said the spokesman, noting that the interests of Chinese and foreign companies intersect quite closely and cannot be divided as the world has already become a shared community with the globalization deepening.

He also warned sanctions that violate international law and trade rules would severely threaten the security of global industrial and supply chains and seriously damage the fair international business environment.

"The U.S. has asked all companies relevant to Xinjiang to prove their own innocence, which would definitely force companies to spend plenty of human resources, materials and finances on useless work and increase unreasonable burden on them," Xu said.

"So-called forced labor in Xinjiang is totally a centennial lie. Laborers of all ethnic groups have complete freedom of choosing their jobs and careers destinations without any limitation on personal freedom," he said, noting that the region has been always trying best to assist the people of all ethnic groups in getting jobs and entrepreneurship.

Chen Zhongkuan, vice-president for the regional federation of trade union, said the trade unions at various levels in the autonomous region have spent half working time in interviewing different workers to learn about situations, including the implementation of labor rights-related laws, signing the labor contracts, collective negotiation of salary and the special rights of women workers.

"We together with the Xinjiang bar association have established a group of nearly 1,000 volunteer rights-protecting lawyers to offer laborers free legal consulting and services," he said.

Wu Sheng, director for the regional cotton association, said the mechanization rate of cotton production in northern Xinjiang has been above 95 percent with the rate in southern region exceeding 80 percent, due to the popularized of cotton-picking mechanization over the years. "That has raised the cotton-planting efficiency in Xinjiang and extremely lowered the planting and labor cost."

"Xinjiang's production value of raw cotton in 2021 was more than that in 2020 and it topped 100 billion yuan ($14.9 billion), accounting for 43.1 percent of the total agricultural production value in the region," he said.

"We welcome the overseas brands and foreign companies in the textile supply chain to visit Xinjiang for research, to appreciate the promising cotton industry in Xinjiang," said Xu.