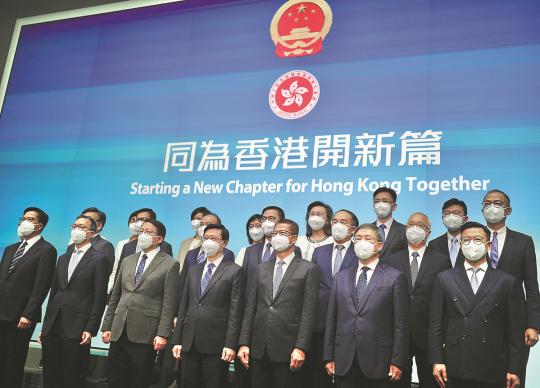 Chief Executive-designate of the Hong Kong Special Administrative Region John Lee Ka-chiu (fourth from left, front) and principal officials of his governing team meet the media in Hong Kong after the State Council approved the nominations of the officials on Sunday. （CALVIN NG/CHINA DAILY）

Incoming Hong Kong leader John Lee Ka-chiu pledged on Sunday that the city's newly appointed governance team will sincerely listen to and communicate with the public, bear in mind their interests, and address the people's concerns.

In debuting with his new team of principal officials, Lee thanked the central government for accepting and approving his nominations, as well as its trust and support for him.

Lee said the team is united and loyal and will be result-oriented with an emphasis on team spirit and execution while sharing ideals of governance, vowing to stay committed to serving the people, enhancing the efficiency of administration, as well as reaching out and listening to the public.

Earlier on Sunday, the State Council, China's Cabinet, appointed 26 principal officials of the sixth-term government of the Hong Kong Special Administrative Region, based on Lee's nominations.

The 26-strong lineup of principal officials is scheduled to assume office on July 1 with Lee. The new governing team will also be the biggest since the city's return in 1997, with the government being expanded from the current 13 bureaus to 15 and the addition of three deputy secretaries to the three top-rank secretaries who are in charge of administration, finance and justice respectively.

The incoming team comprises civil servants with extensive experience in government, professionals, and those who are skilled in their own sectors.

The current director of the Chief Executive's Office, Eric Chan Kwok-ki, 63, has been appointed the chief secretary for administration. Chan joined the Immigration Department in 1982 and was promoted to serve as director of Immigration from 2011 to 2016. Cheuk Wing-hing, who had served in multiple posts in the government, will assume the post of deputy chief secretary.

Apart from Lam and Cheung, four more newly appointed officials are new faces from outside the government, including liver transplant expert and the current Hospital Chief Executive at The University of Hong Kong-Shenzhen Hospital Lo Chung-mau, who will be secretary for health; and Alice Mak Mei-kuen, who has been appointed secretary for home and youth affairs.

Lee said the new appointees are recognized by their peers and chosen for their extensive experience in their respective fields.

The governing team will include five women, making up a quarter of the team－the highest number of female members in a governance team since the handover.

Incumbent Secretary for Security Chris Tang Ping-keung and Secretary for constitutional and mainland affairs Erick Tsang Kwok-wai will stay on their posts.

They said they hoped the new-term government can fully and accurately implement "one country, two systems", help the city further integrate into the nation's development, tackle the most-concerned issues faced by the people, and enhance the city's international competitiveness.

Carrie Lam, in a statement, expressed hopes for the new-term government to act in concert to enable Hong Kong to forge ahead toward development and prosperity.