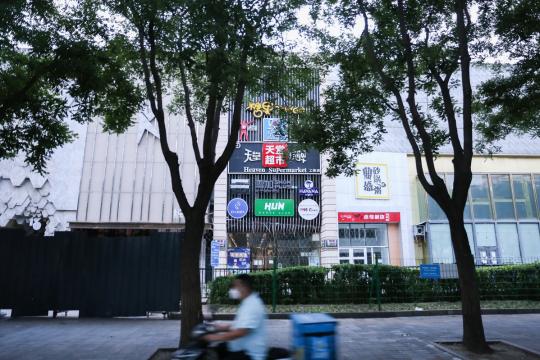 A deliveryman passes by the COVID-hit Heaven Supermarket bar in Sanlitun area in Beijing, June 14, 2022. (Photo by Wu Xiaohui/chinadaily.com.cn)

The Beijing government has conducted a citywide check of all cultural and entertainment venues since the latest infection cluster linked to a bar was reported on June 9 and has revoked several business licenses, a senior official said on Wednesday.

Karaoke rooms, internet cafes and bars were among the venues checked. The authority discovered 89 hidden risks of epidemic control and prevention during the check, said Yu Peng, an official from a comprehensive law enforcement team regulating the city's cultural market.

Three internet cafes and an entertainment venue had their business licenses revoked, he said.

During the latest outbreak since late April, Beijing's market supervision authority sent warnings to more than 18,000 businesses and handed out fines of 2.83 million yuan ($422,000) to those failing to follow epidemic control and prevention procedures such as taking temperatures and checking nucleic acid tests.

Beijing's new COVID-19 cluster linked with the bar Heaven Supermarket in the Sanlitun area has led to 327 infections from midnight Thursday to 3 pm on Wednesday, involving most districts in the city.

The city reported 25 new locally transmitted cases and 38 asymptomatic carriers for Tuesday and seven new infections as of 3 pm on Wednesday, said Liu Xiaofeng, deputy director of the Beijing Center for Disease Prevention and Control, at a news conference on Wednesday.

One of those infections was found from mass nucleic acid testing in communities and is an employee of a restaurant in Chaoyang district. All of the other infections were reported from quarantine locations, he said.

Of the 327 cases, 226 had been to the bar. Seven are employees of the bar and the remaining 94 are related to confirmed cases. As of Wednesday afternoon, Beijing had four medium-risk areas for COVID-19.

The cluster linked to the bar has spread to neighboring Hebei province.

On Tuesday evening, Hebei's Sanhe city, neighboring Beijing and from which many residents commute to the capital for work, reported two positive cases of COVID-19 at their quarantine locations. Both are related to Beijing's Heaven Supermarket bar infection cluster.

The Sanhe city government asked its residents not to leave the city unless necessary and those entering the city must show a negative nucleic acid test result and green health code.