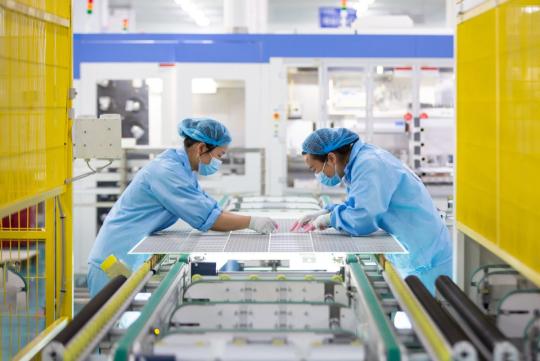 The U.S. government's decision to lift some tariffs imposed on solar products during the Trump administration will further stimulate import of solar power equipment into the United States-and China, as the world's largest producer of solar products, might benefit in the process, industry insiders said on Tuesday.

Reports indicate that the goal of invoking the act is to raise domestic solar manufacturing capacity to 22.5 gigawatts by 2024, said a news report by Reuters.

This is expected to unleash pent-up demand for imported photovoltaic equipment in the U.S., said solar company Risen Energy.

The move is beneficial for both the U.S. solar industry as well as major solar power equipment exporters like China, said the company.

For the U.S., it will not only foster the development of the local solar industry but also create more job opportunities while speeding up local green transition. For China, a global solar industry layout and a full industrial chain will further help domestic companies tap global market potential, Risen Energy said in a statement.

China's solar industry supplies components to photovoltaic producers in Southeast Asia. If the latter benefit from the U.S. move, part of such gains may percolate down to Chinese suppliers, industry observers said.

On Tuesday, stock-market investors in China continued to buy A shares of such listed suppliers, lifting them an average 0.75 percent, extending the nearly 5 percent rise on Monday.

Top climate officials in the Biden administration are already warning that a federal investigation into alleged dodging of tariffs by Chinese suppliers has imperiled the U.S. solar industry just as the U.S. was trying to ramp up clean-energy production.

"China is in almost every supply chain," Mary Lovely, a senior fellow at the Peterson Institute for International Economics, a Washington-based think tank, was quoted as saying by the Washington Post.

The Chinese government has been stepping up efforts to accelerate the planning and construction of large-scale wind and solar projects in recent years. The construction of the second batch of massive wind and solar power projects in the Gobi Desert and other arid regions is expected to encourage investment of up to 3 trillion yuan ($450.9 billion) in related industries.

Toward the end of 2021, China launched its first phase comprising 100-GW of wind and solar power capacity in desert areas.

According to a statement jointly released by the National Development and Reform Commission and the National Energy Administration at the end of May, the country will increase its total installed capacity of wind and solar power to over 1.2 billion kilowatts by 2030 while covering as many as 50 percent of the nation's buildings with rooftop solar panels.