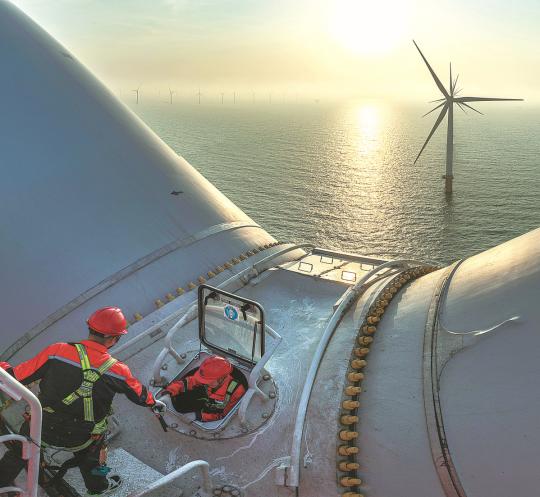 Growth rate of sector in province set to reach 6.5% annually by 2025

The local government has outlined an overall plan to develop an entire industrial chain of offshore wind power, with an overall investment of nearly 500 billion yuan ($75.3 billion) into the sector and an installed capacity of 30 million kilowatts by 2025.

Guangdong, with a vast coastline and superior harbors in South China, is well-positioned to develop five marine industrial clusters with enhanced industrial output by 2025, according to a senior official with the local natural resources authority.

Each of the industrial clusters, including offshore wind power, marine engineering equipment manufacturing, marine tourism, marine oil and gas chemical resources and modern marine fisheries, will be worth at least 100 billion yuan.

According to a development plan for the marine economy of Guangdong during the 14th Five-Year Plan period, which was officially released in late 2021, the province will build a modern marine industry system with international competitiveness, focusing on cultivating and strengthening emerging industries such as marine biomedicine and natural gas hydrates.

Also, traditional competitive industries such as oil and gas chemicals, shipping and fisheries, will be further promoted and upgraded, according to the plan.

Guangdong currently has five major global ports－Guangzhou, Shenzhen, Zhuhai, Dongguan and Zhanjiang－each of which has an annual handling capacity of more than 100 million metric tons of cargo.

According to the plan, Guangdong will strengthen interconnections among marine infrastructure with the neighboring Hong Kong and Macao special administrative regions by building a cross-seas channel group in the Pearl River estuary.

"A mutually beneficial and complementary port, shipping, logistics and support service system with Hong Kong and Macao will be built, and a world-class port group will be jointly promoted in the Guangdong-Hong Kong-Macao Greater Bay Area," Qu said.

Over the past few years, a number of big international petrochemical players, including BASF, ExxonMobil, CNOOC and Shell Petrochemicals, have been introduced to invest in Guangdong.

"We will also optimize the expansion of the three marine service industries－marine tourism, blue finance and shipping services－and accelerate the integration of modern digital technology and the marine industry," Qu said.

The plan encourages qualified financial institutions to set up marine finance business units to process mortgage loans and pledge loans for the usage of specific sea areas and uninhabited islands, ships under construction and oceangoing vessels.

The plan also proposes establishing international ocean development banks and is actively striving to create a China Blue Financial Reform Pilot Zone with Qianhai in Shenzhen as the center.

The province's marine economy growth rate is set to reach 6.5 percent annually by 2025, according to the development plan.

"Green and efficient development of the marine economy is of great importance to sustainable development," Qu said.

Guided by the vision that lucid waters and lush mountains are invaluable assets, Guangdong will accelerate the overall protection, systematic restoration and comprehensive management of the marine ecological environment, Qu added.

The area of marine nature reserves in the province will reach 490,000 hectares by 2025, which will focus on the protection of rare species including Chinese white dolphins, coral reefs, mangroves and kelp.

According to Qu, Guangdong will establish two comprehensive marine test sites at or above the provincial jurisdiction, three popular marine science bases and three marine museums.

In another plan to protect the marine ecological environment in Guangdong, released in early May by the provincial government, the province will complete the construction of five priority zones for marine biodiversity conservation in its eastern and western sea areas and the Pearl River estuary.

The province will also give priority to protecting mangroves by planting and restoring 8,000 hectares of the flora by 2025, according to the plan.