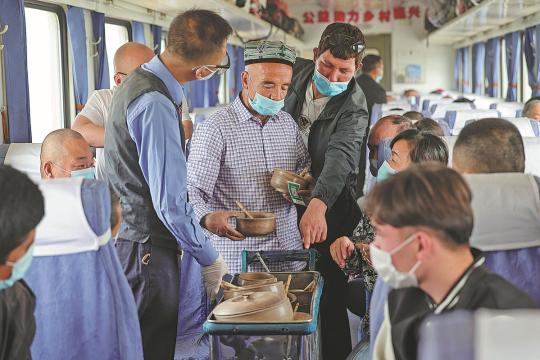 A craftsman offers wood handicrafts to train riders in the Xinjiang Uygur autonomous region in April. The train connects northern and southern Xinjiang and is enjoyed by local residents. (Photo/Xinhua)

China hopes the visit of United Nations High Commissioner for Human Rights Michelle Bachelet, which began on Monday, will help clear up misinformation created by some anti-China forces about the nation's "human rights violations".

In a meeting with Bachelet on Monday in Guangzhou, capital of Guangdong province, State Councilor and Foreign Minister Wang Yi stressed that China has always given top priority to ensuring people's rights to subsistence and development and safeguarding the rights of ethnic minorities.

Wang expressed his hope that Bachelet and her team could take advantage of the visit to comprehensively learn about China's development philosophy, path and achievements as well as its efforts and progress in protecting and promoting human rights.

It is the first time in 17 years that China has hosted a UN high commissioner for human rights. The six-day visit will take Bachelet and her team to Guangdong and the Xinjiang Uygur autonomous region.

Wang said some countries and anti-China forces are spreading misinformation about China by every means, as part of their attempt to contain the country's development, and they try to politicize and weaponize human rights.

He told Bachelet that her trip would help enhance understanding about and cooperation with China, and clear up misinformation.

"To advance the international cause of human rights, we must respect each other and refrain from politicizing human rights, uphold fairness and justice and reject double standards, seek truth from facts and take into account national conditions and development stage of a country, and stay open and inclusive and oppose bloc confrontation," Wang said.

He said that multilateral human rights institutions should serve as a major venue for cooperation and dialogue rather than a new battlefield for division and confrontation.

Bachelet congratulated China on its significant achievements in economic and social development and human rights protection, and spoke positively of the country's contributions in supporting multilateralism, development financing, sustainable development, poverty reduction, climate change, ecological conservation and other areas on the development of human rights.

She expressed the hope that the visit will be an opportunity to enhance mutual understanding and trust between the two sides to jointly deal with global challenges and advance the international human rights cause.

In responding to recent comments by some officials of the United States and the United Kingdom about Bachelet's China visit, Foreign Ministry spokesman Wang Wenbin said on Tuesday that Western countries, including the US and the UK, have made a "political farce" centering around the visit of the UN high commissioner for human rights in China.

They publicly pressed the UN high commissioner for human rights to visit China, including Xinjiang, but when the visit was scheduled, they tried every means to disturb and point fingers at the mission, said Wang, who added the US and the UK do not want to seek the truth, but use Xinjiang to smear China.

Their real concern is that the truth witnessed by the UN high commissioner for human rights and her team will expose their lies and spoil their attempt to use Xinjiang to contain China, Wang added.

Speaking at a news conference on Tuesday, Xu Guixiang, spokesman for the government of the Xinjiang Uygur autonomous region, said that the regional government will provide any help the high commissioner needs to develop exchanges with people from all walks of life in the region.

"We want Bachelet to see a real Xinjiang, and also hope she, in the capacity of a UN official, could tell the truth of Xinjiang to the world," Xu said.