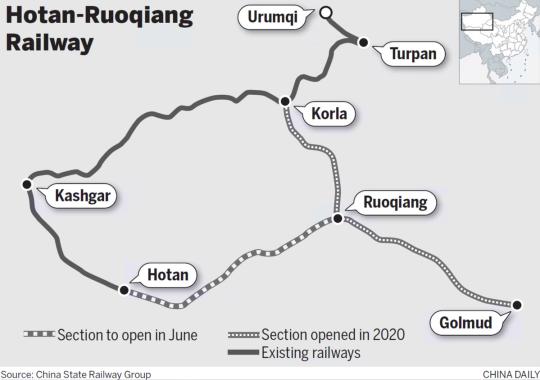 Nine new passenger stations along a railway looping around the Taklimakan Desert in Northwest China's Xinjiang Uygur autonomous region were revealed to the public recently, before the line's opening next month.

The stations, including Qira, Lop, Yutian and Minfeng, are undergoing equipment testing and fine tuning by fire and safety departments.

The 825-kilometer railway, linking Hotan city with Ruoqiang county in the Mongolian autonomous prefecture of Bayingolin, lies on the southern edge of the Taklimakan Desert.

With a designed speed of 120 km per hour, it will pass seven prefecture-level regions in Xinjiang and finally connect to the Golmud-Korla railway, linking the city of Golmud in Qinghai province and the city of Korla in Xinjiang. It will be the third railway linking Xinjiang with other parts of China.

Upon completion, the railway circling the Tarim Basin will be the world's first desert railway loop line.

It will bring railway services to some new places in southern Xinjiang, boosting socioeconomic development and promoting rural vitalization in the region.

The loop railway, which began construction in 2018, will greatly cut travel time for local residents and play an important role in promoting regional socioeconomic growth, according to China State Railway Group.

Construction of the railway is being carried out on the southern edge of the Taklimakan Desert, where wind and sandy weather, as well as huge temperature differences between day and night, bring tremendous difficulties, it said.

Confronted with an intricate natural environment, the company set up a management and construction team with rich experience in desert railway construction, as well as a research team, said Zhang Gang, project manager of China Railway 14th Bureau Group.