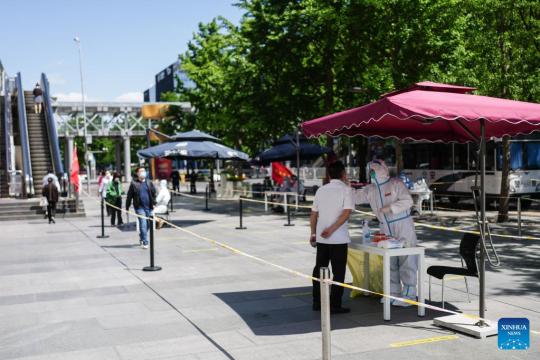 A medic takes a swab sample from a man for nucleic acid test at Xidan area in Beijing, capital of China, May 14, 2022. (Photo/Xinhua)

Beijing saw a jump in COVID-19 cases over the weekend as Haidian district joined four others to require people to work from home in order to curb the epidemic.

The city reported 94 new locally transmitted COVID-19 cases between 3 pm on Saturday and 3 pm on Sunday, bringing the total number of infections to 1,493 since April 22, said Liu Xiaofeng, deputy director of the Beijing Center for Disease Prevention and Control.

Of the newly reported infections, 77 were reported in controlled zones, and 17 were found from mass nucleic acid testing conducted at the community level, he said at a daily news conference on Sunday.

A total of 16.25 million people participated in testing on Saturday, with 10 tube samples showing up positive for COVID-19, according to Wang Xiao'e, an official with the Beijing Health Commission.

Xu Hejian, a spokesman for the Beijing city government, said the cluster infections at the Yuegezhuang market in Fengtai district and sporadic cases found in Fengtai, Haidian and Dongcheng districts have added to the uncertainties and risks of the city's epidemic situation, which remains severe and complicated.

However, residents can rest assured that the city has enough supplies of daily necessities, while supermarkets and deliveries in controlled zones remain open to meet people's demands, he said.

Residents living in Chaoyang, Haidian, Fengtai, Fangshan and Shunyi districts should work from home from Sunday to May 28, while other districts should also lower the number of people working in offices, Xu said.

The point of working from home is staying at home, he said. Individuals and employers should make concerted efforts to implement epidemic control measures, limit people's movements and cut off transmission chains as soon as possible, he added.

Xiao Dan, director of the Party's publicity department in Haidian, said the district has tightened epidemic control measures and has asked residents to work from home since Saturday.

People in controlled areas should not leave their homes unless they are going out to take nucleic acid tests, take out trash or pick up deliveries, she said.

Supermarkets, medical institutions and drugstores are allowed to continue operating, and restaurants should only provide takeout meals, she added.