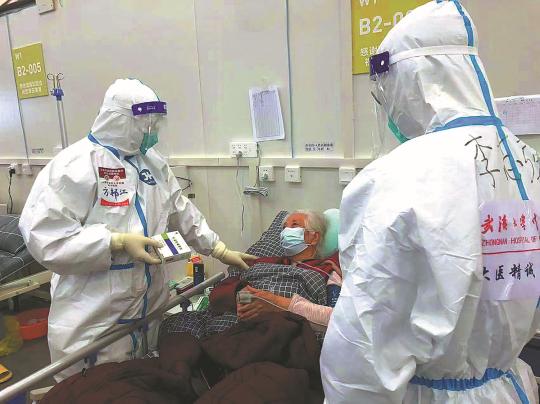 Doctors examine a patient at the makeshift hospital. （Photo/CHINA DAILY）

After signing up to help tackle Shanghai's latest wave of COVID-19, Chen Lei, 41, a nurse from Renmin Hospital of Wuhan University, Hubei province, did not immediately tell her family.

The first person to hear of Chen's decision was Wei Yin, a nurse in Shanghai.

In a text message sent to Wei on the afternoon on April 2, Chen wrote, "I'm going to fight the outbreak with you side by side."

Chen had no hesitation in making her decision, because Wei, who works at Shanghai Huashan Hospital, traveled to Wuhan to help the city when it was hit hard by COVID-19 in early 2020. "Our friendship has developed since then," Chen said.

Within minutes of contacting Wei, Chen received a reply from her friend, who tried to persuade her not to travel to Shanghai.

"It is easier to become infected with the current virus, which would be a more dangerous situation than two years ago. We also won't be able to see each other this time," said Wei, a Shanghai native.

Wei also phoned Chen to tell her about the high risk of infection, but Chen was determined to join the frontline battle against the outbreak. "It's what a medic should do, and also what a friend should do," she said.

At 6 pm on April 3, Chen arrived in Shanghai with some 50 medics from her hospital in Wuhan.

After about two days of preparation and training, they began nursing people infected with the virus at a makeshift hospital at the Shanghai New International Expo Center in Pudong New Area.

Medical workers from Tianjin, and Hubei and Jiangxi provinces are in charge of the temporary hospital, which has a capacity of 15,000 beds. As of May 1, more than 30,000 patients who recovered from infection had been discharged from the facility.

Before starting work at the makeshift hospital, Chen and her colleagues from Wuhan learned how to say "fever" and "headache" in the Shanghai dialect, to better ease patients' fears and learn more about their needs.

Chen and Wei, who are of a similar age, met during the battle against COVID-19 in Wuhan, and found that they had similar ideas about their work.

Over the past two years on WeChat, they have shared medical knowledge and interesting stories about life.

Chen said, "I've always appreciated the timely and strong support provided by the Shanghai medical team two years ago, so this time, when they encountered difficulty in Shanghai, I was duty-bound to help."

Zhao Kaochang, a respiratory physician from Wuhan who traveled to help Shanghai, also expressed his thanks for the efforts made by Shanghai medics in 2020.

"I feel it is my responsibility to repay the favor, and I want to fight with them shoulder to shoulder," he said.