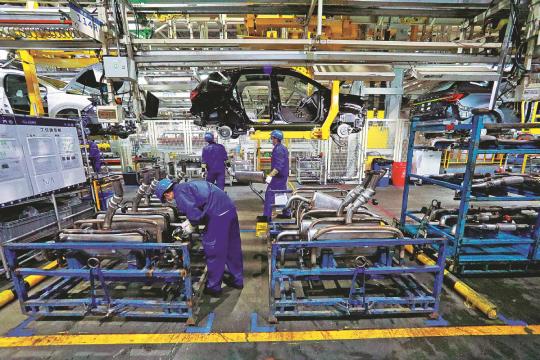 A growing number of manufacturers in Shanghai have relaunched their operations despite the challenges posed by COVID-19, showing their confidence in the city's economic outlook.

Online news platform ThePaper.cn quoted Wang Xiaoqiu, president of SAIC, as saying at the listed company's annual performance news conference on May 5 that with the gradual recovery of supply and logistics chains, the manufacturer is working hard to make up its losses experienced during the outbreak.

Wang said the company's capacity in Shanghai accounts for about 30 percent of the group's total.

"Strictly following the epidemic prevention and control rules, we are relaunching our business at an accelerated pace, trying to increase capacity to the pre-epidemic level as soon as possible," Wang said.

China's largest listed automaker began stress tests at the plant on April 18, and the first complete vehicle rolled off the assembly line the following day.

As of April 29, up to 2,400 vehicles had left the restarted assembly line at the SAIC Motor's plant in Lingang on the southeastern fringes of Shanghai, said Chen Peifeng, a director at the factory.

"Our daily capacity currently amounts to about 300 vehicles, a rise of some 50 percent from the stress tests period," Chen said.

Meanwhile, following resumed production at Tesla's Shanghai Gigafactory on April 19, about 10,000 vehicles had been manufactured as of April 30, Wu Qiang, deputy director of Pudong New Area, said at a news conference on May 7.

Recovering about one-third of its capacity before the current COVID-19 outbreak, Tesla expects its output to reach pre-pandemic levels in the middle of this month, China Business News, or CBN, reported.

An industry insider speaking to CBN on condition of anonymity said, "Numerous orders call for resumed production and deliveries, so raising capacity as soon as possible is the priority," adding that it currently takes at least six months for vehicles to be delivered.

Tao Lin, vice-president of Tesla Inc, told CBN: "We have full confidence in China's development, and we believe that pandemic-related challenges are only short-term. Everyone is resolved to confront the challenges, and we think that production will soon fully recover."

Tao added that as the automotive industrial chain is extremely long, Tesla cannot resume stable and consistent output without all its suppliers operating normally.

This requirement is equally true for SAIC Motor.

Xu Guangqing, a director of the company's passenger vehicles logistics division, said: "Along with the gradual recovery of logistics and supply chains, we have thoroughly evaluated conditions at about 400 of our suppliers. We have examined their capacity, stock and raw materials, as well as their staff numbers and production situation, so that we can provide assistance to our downstream suppliers in resuming output.

"In the meantime, we are also working actively with government departments to work out green channels to ease pressure on supply and logistics chains."

German auto parts supplier Continental AG said: "The automotive industry is sparing no effort in ensuring stability ... Our Shanghai plant is currently still under closed-loop production, with about 35 percent of our staff operational for the moment. Closed-loop production is proceeding smoothly." 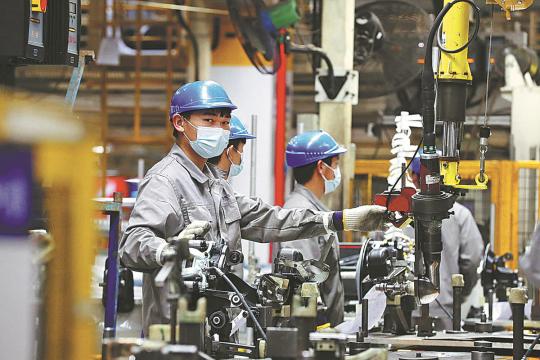 Qi Qi, an associate professor at Guangzhou Civil Aviation College in Guangdong province, said: "Smooth logistics are crucial for relaunching production. In order to ensure output, plants need to ship in raw materials and ship out products, enabling enterprises along the industrial chain to collaborate smoothly."

There has been an obvious improvement in logistics services, especially after the central government's call in the middle of last month for efforts to keep industrial and supply chains stable, Qi said.

"With the joint efforts of the government and all parties involved, we have recently seen many advances in logistics, including vital raw materials and facilities transported by Eastern Air Logistics, the freight unit of parent company China Eastern Air Holding. This has made the recovery of related industrial chains possible during the pandemic," Qi added.

At 1:12 am on May 9, an Eastern Air Logistics, or EAL, chartered cargo flight from the Japanese city of Osaka landed at Shanghai Pudong International Airport. The flight carried 41 metric tons of resources－20 tons of raw materials urgently needed by high-tech enterprises and 21 tons of equipment and facilities－helping hightech enterprises in Shanghai and the Yangtze River Delta region restore production, according to EAL.

In addition, Yan Feixiang, deputy general manager of EAL's marketing division, said 45 tons of raw materials for high-tech enterprises were transported from South Korea and Japan by EAL from May 1 to May 8.

Thanks to sufficient preparation work, the shipments were completed with a high degree of efficiency, Yan added.

Early this month, EAL was operating about 100 cargo flights a week nationwide, a rise of 43 percent from early April. Weekly cargo throughout rose by 56 percent.

At Shanghai's two airports, EAL handled a total of 40,551 tons of cargo and mail in the first half of this month, a rise of just over 69.6 percent month-on-month.

Yan said: "With more key foreign trade enterprises appearing on Shanghai's 'white list' for resuming business operations, we will allocate additional cargo resources to help them. We are also working flat out to ensure industrial and supply chains flow smoothly."

Shanghai Pudong International Airport handles an average of 123 cargo flight arrivals and departures each day. In the two weeks from May 1 to 14, the airport's average daily cargo throughput reached above 5,500 tons, a rise of just over 72.8 percent from the same period of April, according to the Shanghai Airport Authority.

Zhang Qiang, the company's chairman, said, "This month, logistics services from Changzhou and Kunshan in Jiangsu province have become smoother, and several of our suppliers are on the white list to resume operations." 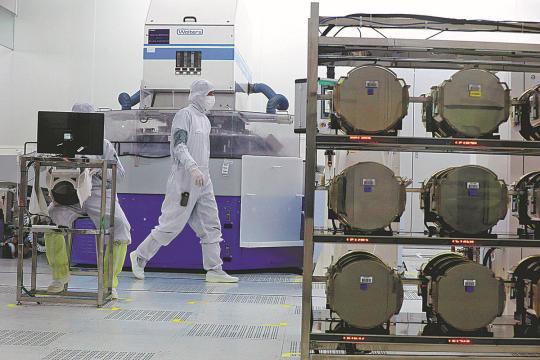 Employees work at a silicone production factory in Pudong on April 29. [Photo by Zhu Xingxin/China Daily]

Shanghai is an important international gateway for imports and exports, with the city playing a vital role in industrial and supply chains not only in the Yangtze River Delta region, but also nationwide and overseas.

Zhang Wei, the city's vice-mayor, said during a news conference on April 22 that customs clearance and transportation efficiency have fallen below normal levels during the current outbreak of COVID-19.

As of April 30, Shanghai Port had restored 80 percent of its pre-pandemic capacity, while the average daily container throughout last month at the city's Yangshan Port recovered to 85 percent of the level in the first quarter, according to public data.

Police at Shanghai General Station of Immigration Inspection has upgraded and optimized the cargo risk management system and simplified the customs clearance platform. As a result, cargo flight arrivals and departures rose by 49.6 percent from the same period a month ago, reaching a total of 1,980 flights, according to the station.

Industry insiders and experts said many challenges lie ahead for a complete recovery of industrial and supply chains.

Qi, from Guangzhou Civil Aviation College, said: "The recovery of supply chains needs every single element along industrial chains to flow smoothly, be it raw materials, parts, facilities and equipment, or production, assembly, trade, logistics, and others. To reach that point, we have also to ensure that the rules for pandemic prevention and containment are strictly followed."

Due to supply chain complexities, production at Tesla and other major automotive manufacturers faces a number of hurdles on the road back to normal operations.

For example, citing the electric vehicle giant's financial report, CBN said Tesla's Shanghai Gigafactory lost the output of some 50,000 vehicles－about one month's capacity－due to the pandemic.