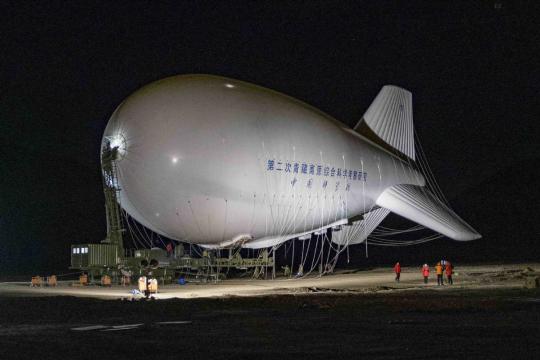 The Jimu 1 aerostat is prepared for takeoff on Sunday in the Tibet autonomous region. (SUN FEI/XINHUA)

Chinese scientists launched the latest model of the Jimu 1 aerostat, a giant helium-filled tethered airship, on Sunday to collect weather data at a world-record altitude of 9,032 meters on the Qinghai-Tibet Plateau.

It was the first time an aerostat of its size had reached this height, surpassing even the summit of the 8,849-meter-tall Mount Qomolangma, known as Mount Everest in the West.

Yao Tandong, the director of the Institute of Tibetan Plateau Research at the Chinese Academy of Sciences, said the feat represented an integration of frontier sciences with technological innovation, and would allow scientists to directly collect atmospheric data above an altitude of 9 kilometers on the Qinghai-Tibet Plateau for the first time.

"These findings will contribute to the global effort in addressing climate change," he said.

The surface of the aircraft is made of advanced composite fabric that is lightweight, resistant to radiation and can withstand temperatures as low as -70 C. It has a volume of 9,060 cubic meters and weighs 2.6 metric tons, according to the institute.

The aerostat can carry numerous scientific instruments that enable scientists to collect atmospheric data and study the moisture transport process at extreme altitude. It can also track changes in black carbon, dust, methane, ozone, carbon dioxide and other substances in the air.

Researchers hope these data can yield important insights on how westerlies－winds that blow from west to east in the middle latitudes between 30 and 60 degrees－affect the environment on the Qinghai-Tibet Plateau.

The Jimu 1 Model III is the latest and biggest of the three airships developed by Chinese scientists to collect atmospheric data and study the effects of climate change on the plateau. The first model was launched in 2019 and reached a height of 7,003 meters.