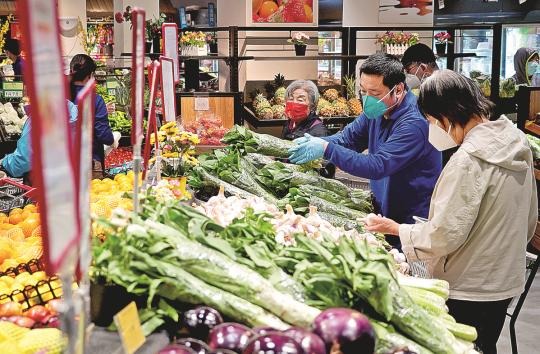 People select vegetables at a supermarket in Chaoyang district, Beijing, on May 13, 2022. Stocks were increased to ensure adequate supply during the epidemic and a negative nucleic acid result is required to enter markets. [Photo by Chen Dong/For China Daily]

Testing to continue through weekend as three workplace clusters reported

Beijing reported three COVID-19 clusters at workplaces this week as the number of infections continued to grow, according to a senior official from the city's CDC.

"Beijing is still facing a severe situation from the ongoing outbreak. The hidden transmission risks still exist at the community level and the transmission chains in the city are not yet completely cut," Pang Xinghuo, deputy director of the Beijing Center for Disease Prevention and Control, said at a news conference on Friday.

"We should stick to the dynamic-zero policy and strengthen the management of key groups of people including staff in logistics industries and public transportation units."

Among the three clusters, one involving a subway renovation project by China Railway 11th Bureau Group Third Corporation had resulted in 41 infections by Friday, involving four districts in the city, according to Pang.

Nineteen new cases of this cluster were reported on Friday. Among the cases, 31 were reported from Haidian district where the company is located.

Pang expected more cases will be reported in the future due to this cluster.

Lin Hang, deputy head of Haidian district, said the authority has disinfected four hotels that the company has rented in Haidian and conducted nucleic acid tests for around 110,000 residents in the community where the company is located.

Haidian district reported 24 new locally transmitted cases in total on Thursday and Friday, including 23 in controlled zones and one from the mass nucleic acid tests in communities.

On Monday, Beijing reported another cluster discovered in a data center of the Beijing Rural Commercial Bank in Shunyi district. By Friday afternoon, the number of infections in the cluster had reached 34, of which 26 were employees and the rest their family members.

The third cluster reported on Friday involved a bus station and the cluster has resulted in three cases by Friday afternoon. The epidemiological investigation is still being conducted at present.

Of the new infections, 40 were reported in controlled zones, and 11 were found from the mass nucleic acid tests at the community level.

In order to discover the potential risks and cut the transmission chains swiftly, the government decided to conduct another three rounds of mass nucleic acid tests on Friday, Saturday and Sunday.

Since the latest outbreak occurred on April 22, the city has done several rounds of mass tests in most of its districts, which has helped to discover the risks and curb the virus spreading.

Up to 9,694 testing spots have been set up in the city for the mass tests on Friday and the weekend, he said.

China has greatly boosted its COVID-19 nucleic acid testing capacity over the past two years and local authorities are working to increase the number of testing personnel to facilitate the establishment of regular testing stands in large cities, the National Health Commission said on Friday.

Guo Yanhong, an official with the commission's bureau of medical administration, said during a news conference that there are currently 153,000 professionals capable of processing 57 million samples a day.

As the State Council's Joint Prevention and Control Mechanism has recently ordered large cities to make regular nucleic acid tests available to residents within a 15 minute walk, Guo said the new requirement will increase convenience and facilitate the early detection of new infections and increase the ability of the early warning systems to bring new clusters under control.