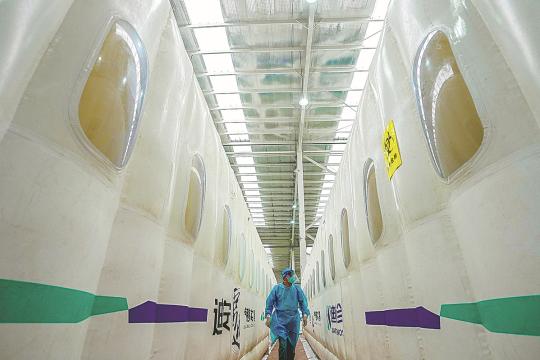 A staff member inspects inflatable COVID-19 testing labs in Shunyi district, Beijing, on May 10, 2022. The labs were built in two days from May 3 to 5, and have a testing capacity of 100,000 tubes per day. (Photo by WU YIBIN/FOR CHINA DAILY)

Beijing's epidemic situation remains intense as the total tally of infections since April 22 approached 900 with several clusters at workplaces adding uncertainty to the trend of the outbreak, a senior official said on Wednesday.

Xu Hejian, a spokesman for the Beijing government, said at a news conference on Wednesday that the city should continue to take swift action to curb the virus spreading.

Beijing reported 56 new locally transmitted COVID-19 cases in 24 hours starting Tuesday afternoon, bringing the total number of infections to 892 since April 22. Fifteen districts are involved, according to Pang Xinghuo, deputy director of the Beijing Center for Disease Prevention and Control.

All the new infections were reported in controlled zones, she said.

On Monday, Beijing reported a COVID-19 cluster discovered in a data center of the Beijing Rural Commercial Bank in Shunyi district.

By Wednesday afternoon, the number of infections in the cluster had risen from 28 to 32, of which 25 were employees and the rest their family members, said Pang.

Another cluster reported on Tuesday in Fangshan district involved a subway renovation project.

By Wednesday afternoon, 15 cases had been found in Fangshan and Haidian districts.

Pang expected more cases will be reported in the future due to this cluster.

"Companies should reduce in-person meetings and move them online to reduce infection risks. No one should leave Beijing unless it's absolutely necessary," she said.

Last week, Beijing reported a case where an infected person passed the virus on to three people after visiting a public toilet several times, which later led to nearly 40 infections along the transmission chain.

Pang urged people to wear masks that have a good level of protection and to wash hands properly, especially after using public toilets.

Xu Li, deputy director of the Beijing Commission of Urban Management, said on Wednesday that the authority has strengthened the management of public toilets and increased the frequency of disinfection.

"The places that people often contact in public toilets, such as taps, handrails, hand dryers and other buttons, will be disinfected at least four times a day," he said.

As of Wednesday afternoon, Beijing had 20 high-risk areas for COVID-19 and 34 medium-risk areas.