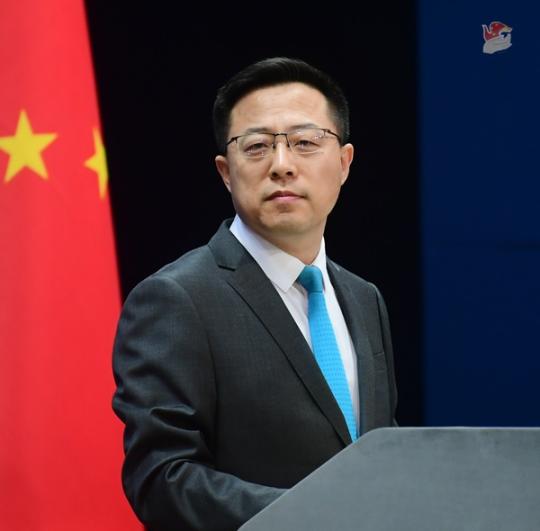 China on Tuesday warned the United States that a move to engage in political manipulation on the Taiwan question and any attempt to change the status quo in the Taiwan Straits would backfire, after Washington changed a fact sheet about its relations with Taiwan.

Foreign Ministry spokesman Zhao Lijian made the remark at a daily news briefing, saying that the altering of the document is a trick played by the U.S. to hollow out the one-China principle.

The U.S. Department of State on May 5 removed solemn commitments Washington made on the Taiwan question including acknowledging Taiwan is part of China and not supporting "Taiwan independence".

"History cannot be tampered with, facts cannot be denied, and right and wrong cannot be distorted," Zhao said.

There is but one China in the world and Taiwan is an inalienable part of China's territory, and the government of the People's Republic of China is the sole legal government representing the whole China, Zhao said.

They are the common consensus of the international community and widely recognized norms governing international relations, he added.

Zhao stressed that the U.S. should abide by the one-China principle and the stipulations in the three joint Sino-U.S. communiques, as well as the political commitments made to China on the Taiwan question.

He urged Washington to implement President Joe Biden's remarks that the U.S. does not support "Taiwan independence" and stop exploiting Taiwan-related questions to engage in political manipulation to contain China.

The U.S. State Department also added wording on "the Six Assurances", referring to six arms sale-related assurances given to Taiwan in 1982. The U.S. Senate and House of Representatives in 2016 passed a joint resolution, claiming both "the Six Assurances" and "Taiwan Relations Act" are the cornerstones of its relations with Taiwan.

China has on many occasions expressed its opposition to "the Six Assurances" or "Taiwan Relations Act" unilaterally concocted by the U.S., saying they run counter to the principles of the three Sino-U.S. joint communiques and are null and void if the U.S. puts its domestic law above international law.

Xin Qiang, deputy director of the Center for American Studies at Fudan University, told Global Times that the change of the fact sheet showed the adjustment of Washington's policy toward Taiwan.

"The deletion of 'not supporting Taiwan independence' is a big step backward, which is constantly hollowing out the substantive content of the U.S.' one-China policy," he added.

He predicted that the U.S. would further enhance its substantial ties with Taiwan including supporting Taiwan's meaningful participation in the United Nations systems and stepping up arms sales to Taiwan.