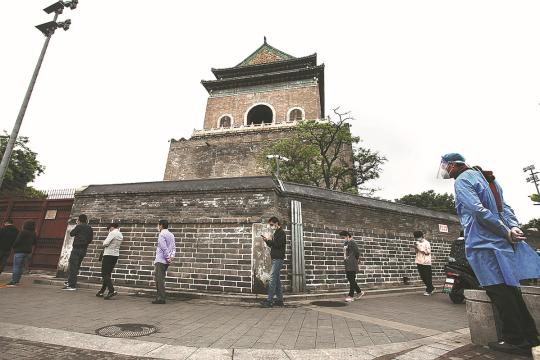 People wait for nucleic acid tests outside the Bell and Drum Towers square in Beijing, May 8, 2022. （Photo/CHINA DAILY）

As Beijing is still fighting intensively against the latest outbreak of COVID-19, the city government has decided to continue carrying out mass nucleic acid testing in districts and key areas and to implement stricter measures to contain the spread of the virus.

The city reported 117 new cases in the previous 48 hours by 3 pm on Sunday, bringing the total tally of infections to 727 during the latest COVID-19 outbreak since April 22, said Pang Xinghuo, deputy director of the Beijing Center for Disease Prevention and Control, at a news conference on Sunday.

Among the new infections, two were found during testing at the community level on Saturday, and others were reported in controlled zones, Pang said.

"The newly found cases at the community level are the biggest threat to epidemic control. The best option is to take faster action to curb the spread of the Omicron variant," said Xu Hejian, a spokesman for the city government.

Xu also said that once a new case is identified, it is critical that related work such as epidemic investigations, identifications of close contacts and the transfers of patients to hospitals be handled within 24 hours of discovery.

Quick action is essential to curb the spread of the virus at the community level, he added.

Of the 727 newly confirmed infections involving 15 districts, Chaoyang has registered 299 cases, the most in the latest outbreak, followed by Fangshan, which has reported 195 cases.

Chaoyang has decided to conduct three rounds of mass nucleic acid testing for people living or working in the district from Saturday to Monday.

On Saturday, 15.52 million people in Beijing were sampled for nucleic acid testing. The screening saw five tubes test positive, with each tube containing 10 individual samples－two in Chaoyang and Shunyi, and one in Fangshan.

Operations at all enterprises have been suspended except for the ones that are needed to ensure people's livelihood, she said.

According to Pang, 686 of the 727 cases since April 22 are people who have been vaccinated. Of the 686,588 had received at least two doses and none has been reported as a severely ill or critical case.

Pang urged eligible people, especially children and seniors, to get vaccinated as soon as possible.