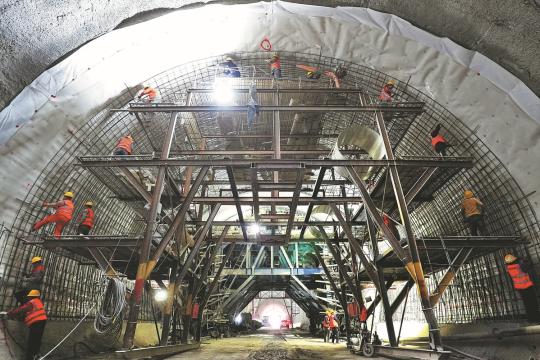 The use of special-purpose bonds allocated to local governments is a key measure to catalyze growth and promote the systematic building of modern infrastructure, an official said. Economists believe that infrastructure investment tends to be a critical measure in accelerating growth this year.

Prior to the May Day holiday, the 11th meeting of the Central Committee for Financial and Economic Affairs on April 26 underlined the imperativeness of comprehensively advancing modern infrastructure development. The meeting urged for increased fiscal spending, a "broadening of long-term financing channels" for construction, and better cooperation with private capital on competent investment, according to the meeting statement.

The idea reemerged in the readout of the meeting of the Political Bureau of the Communist Party of China Central Committee on April 29 by urging the ramping up of infrastructure construction.

Efforts shall be made to stabilize economic growth while maintaining COVID-19 prevention and control, and strengthening macroeconomic policy adjustment to realize the goals of economic and social development this year, the meeting statement said.

Economists said they believe these meetings signal that economic growth is still of critical importance and they expect that boosting infrastructure construction will be a critical way to do so. At the same time, the evolving COVID-19 situation remains the biggest uncertainty in deciding whether infrastructure investment will effectively drive up growth.

Zhu Ning, deputy dean of the Shanghai Advanced Institute of Finance, said that the meetings gave a signal that economic growth is still of paramount importance, and infrastructure investment is one of the likely measures to boost growth in the second half.

To this end, we expect that more breakthroughs will be seen on the fiscal front－for example, a more innovative and flexible use of special-purpose bonds for local governments," Zhu said. "We also expect greater improvement in the financial environment in the second half."

He said further boosting confidence in the financial market will be effectively passed on to the real economy and build up better prospects for investors. Also, the construction of "new infrastructure "and other high-level sustainable projects still bears room for investment.

"However, the realization of the construction of infrastructure projects still hinges on the COVID-19 situation for the latter half of this year, so I think the pandemic and related containment remain the greatest uncertainties for the economy this year," he said.

Yu Xiangrong, China chief economist at Citigroup, said in an exclusive interview with China Daily on Tuesday that infrastructure is likely to reemerge as a top policy priority and a key investment theme ahead.

"The recent high-level meetings show that China will strive to achieve the growth target. Such reiteration would help anchor market expectations and create a policy momentum to drive growth," Yu said. "We believe the government will accelerate the implementation of pro-growth policies already planned, but also prepare contingency measures amid growing economic headwinds."

Unofficial data on Thursday shows that the Caixin services purchasing managers' index for April stood at 36.2, a sharp contraction from 42 in March.

Yu said going forward, potential backup policy options to boost growth may include advancing part of the special local government bond quota in the second half of this year, part of efforts to boost infrastructure and catalyze growth.

"We believe the usage of special bonds will be expanded, with priority given to transportation, energy, ecological protection and public housing," he said.

He said government-funded vouchers are also likely to bolster durable and service consumption.