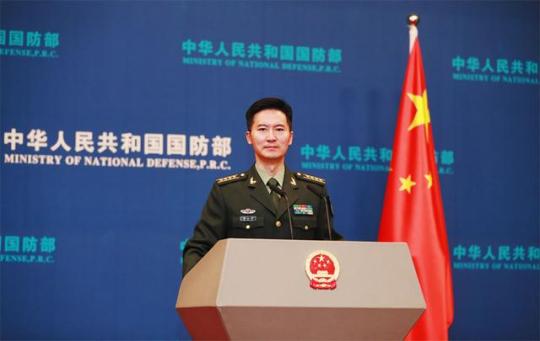 Freedom of navigation being used as ruse to undermine security interests

China resolutely opposes the United States using freedom of navigation to undermine the security interests of other countries, as well as hyping the so-called Chinese space threat to justify its militarization of space, the Ministry of National Defense said on Thursday.

In early April, the Pentagon released its annual Freedom of Navigation Report for Fiscal Year 2021. During the period from Oct 1, 2020 to Sept 30, 2021, U.S. forces had challenged 26 countries and regions throughout the world for their excessive maritime claims, the report said.

Senior Colonel Tan Kefei, spokesman of the ministry, said at a news briefing on Thursday that for a long time the U.S. has been using "freedom of navigation" as an excuse to ignore other countries' maritime interests and security concerns.

China resolutely opposes the U.S. sending warplanes and warships to undermine other countries' sovereignty and security, and disrupt regional peace and stability. China urges the countries targeted by the U.S. operations to jointly oppose U.S. maritime bullying, he said.

Tan said the U.S. did not join the United Nations Convention on the Law of the Sea, yet it uses its military power to enforce its rules around the world.

"The U.S. has no need to glorify its actions with a report. Instead, it should reflect on itself and recognize how many accidents and casualties were the result of its selfish actions," he said.

"We urge the U.S. to act like a responsible big nation, stop its so-called 'freedom of navigation' operations, stop publishing such irresponsible reports, sincerely respect other nations' sovereignty, security and maritime interests, and take concrete actions that are beneficial to regional peace and stability," he said.

In response to a recent U.S. military report claiming China is operating around half of the world's surveillance satellites and has the capability to spy on the U.S. and its allies, Tan called the report baseless and said it was purposefully hyping the so-called Chinese space threat to justify the U.S.' own military build-up in space.

On the other hand, China has always upheld the peaceful use of space and international cooperation, while opposing the militarization of space and a space arms race, he said.

When commenting on Sino-U.S. military-to-military relations, Tan said China and the U.S. cannot defeat or change each other, but having a stable military relationship is in the common interest of both countries.

However, Tan said there are required principles for developing bilateral military relations, adding that the People's Liberation Army will take concrete actions against U.S. provocation, smearing and coercion regarding the Taiwan question, maritime security and the Ukraine issue.