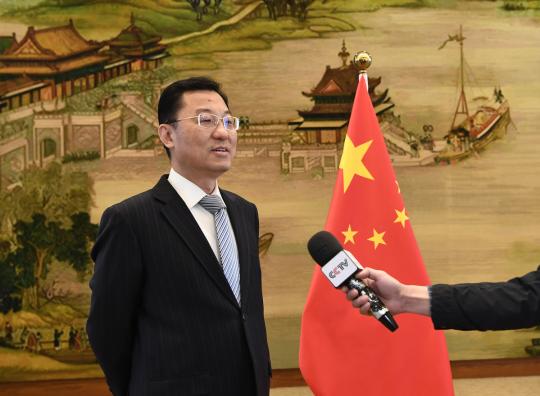 A senior Chinese diplomat has lashed out at nations including Australia over their accusations regarding security cooperation between China and the Solomon Islands, saying that such actions constituted infringements of other nations' sovereignty, interference in domestic affairs and a violation of international rules.

Xie Feng, vice-minister of foreign affairs, said at the launch ceremony of a climate action cooperation center between China and Pacific island nations that countries including Australia are not entitled to draw a "red line" between the Solomon Islands and China.

He reiterated that their cooperation does not target a third party and conforms to the common interests of the Pacific island nation and the South Pacific region.

"This is essentially and drastically different from the attempts by some countries to form small circles, conduct underhanded maneuvers, establish military blocs, spur an arms race, exacerbate the risks of nuclear proliferation, stir bloc confrontation and introduce regional tensions," he said.

Xie said the Pacific is the common home of all nations in the region and a major stage for international cooperation, rather than some nations' backyard, territory or arena for geopolitical games.

"The people of Pacific island countries and the international community are sharp-eyed, especially over which side is upholding regional peace, promoting win-win cooperation and common development, and which side is seeking hegemony, creating divides and stirring confrontation," he said.

He added that China's efforts to further ties and cooperation with Pacific island nations are not out of self-interest, and the nation will not seek a sphere of influence or resort to bullying or coercion.

Qiu Qiwen, vice-minister of ecology and environment, said at the event that China has already devoted 1.2 billion yuan ($180 million) to promote South-South cooperation in climate change, including cooperation with Samoa and Tonga.

He announced the signing of a cooperation agreement on climate action between China and Kiribati, adding that China will host online training for Pacific island nations to tackle climate change.

Tapusalaia Toomata, the ambassador of Samoa to China, said China's national strategy on climate change would provide a very good platform for cooperation and assistance for Pacific island countries in tackling climate change and advancing the region's initiatives.