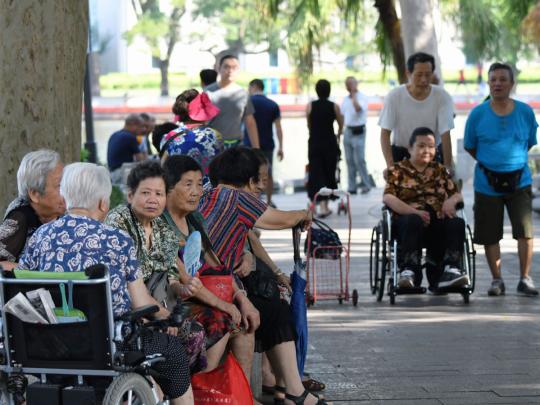 Senior visitors gather at a park in Fuzhou, Fujian province, on Aug 7. (Photo/Xinhua)

The State Council, China's Cabinet, has released a guideline on pushing forward the development of private pension schemes, which are seen as vital in supplementing the nation's existing pension system.

According to the guideline, people covered by the State pension system can open a private pension account online on a platform run by the Ministry of Human Resources and Social Security. They can then open an individual finance account at a commercial bank authorized on the platform to manage pension payments.

The guideline allows people to deposit up to 12,000 yuan ($1,870) annually to the individual account, and the funds can be used to purchase financial products that offer stable, long-term returns with low risks. All profits or losses will be borne by the depositors.

Those who join the private pension scheme will be given tax preferences, but detailed information and policies have not yet been released.

The guideline said people can't withdraw the money under the private pension scheme unless they meet certain conditions. Those who are retired, have lost the ability to work or are emigrating from the Chinese mainland can withdraw the money monthly or in a one-off payment.

The nation currently runs a combined pension system, under which by the end of 2021 the nation's basic pension program had covered over 1.03 billion residents, while supplementary programs such as enterprise annuities and commercial insurance support had covered over 58 million people.

Hu Jiye, professor from the Business School of the China University of Political Science and Law, said in a recent interview with Red Star News that the nation can transform from having a savings-based pension system to an investment-driven one by building up the private pension scheme.

He said people can join the scheme voluntarily and that "it's a supplement, not a replacement".

The guideline said rolling out the scheme is critical to improving people's sense of happiness and security, and it can also help support the country's increasingly aging population.

Pang Shi, director of the department of employment and entrepreneurship at the Chinese Academy of Personnel Science, said the scheme is a long-term investment tool with an ultimate goal of supporting the elderly.

"It's a new attempt to grow individual savings and will be an important way to preserve personal wealth after detailed tax preferences are released," she said.