China looking at sending robotic probe to far side of moon 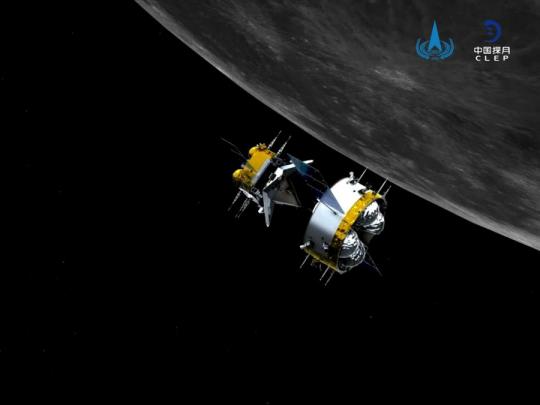 A graphic simulation shows the orbiter and returner combination of China's Chang'e 5 probe after its separation from the ascender. (Photo/China National Space Administration/Handout via Xinhua)

Chinese scientists and engineers are considering sending a robotic probe to collect dust and rocks from the far side of the moon, an ambitious endeavor that will likely make it a world's first, said a senior space agency official.

Wu Yanhua, deputy director of the China National Space Administration, said on Friday that the United States, Russia and China have brought lunar substances back to Earth, but none of them has ever obtained samples from the silver sphere's far side, which never faces Earth.

Chinese researchers have suggested the administration could use its Chang'e 6 robotic mission to land on the far side and bring samples back, Wu told reporters at a news briefing at the administration's headquarters in Beijing.

"Many scientists at home and abroad told us that they are eagerly expecting us to bring samples back from the far side because such materials will be very scientifically valuable," he said. "They will enable scientists to advance their studies about the far side's age. Researchers will also analyze the samples' composition to broaden the knowledge about the far side."

The official said the substances brought back by China's Chang'e 5 probe have helped scientists find that there still were volcanic activities on the moon's near side around two billion years ago, and materials from the far side will allow them to verify the hypothesis that volcanoes became inactive about four billion years ago on the far side.

To achieve this goal, Wu said, it will be needed to transmit signals between the far side and the ground control.

"Currently, we have the Queqiao relay satellite operating in lunar orbit to transmit signals between the control center and the Chang'e 4 lander as well as the Yutu 2 rover, but it will not work long enough to support the Chang'e 6 mission. So we are mulling over the feasibility of a signal relay and navigation network above the moon," Wu said.