Attempt by U.S. NGO to meddle will fail 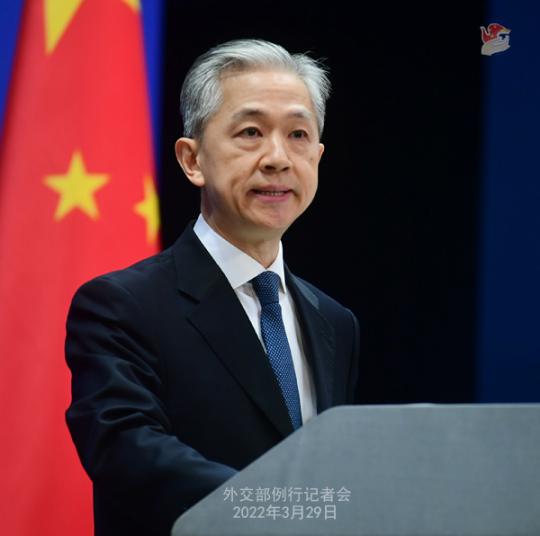 The United States has not and will not succeed in using Taiwan to contain China by endorsing "Taiwan independence" forces under the pretext of "democracy", Foreign Ministry spokesman Wang Wenbin said on Tuesday.

Wang made the remark as Damon Wilson, the president of the U.S. National Endowment for Democracy, visits the island.

The true intention of Wilson's visit is to provoke separation, Wang said at a daily news conference. Recalling the "bleak conclusion" of the U.S.' "Summit for Democracy" last year, Wang said the U.S. will face greater failure in its attempts to support "Taiwan independence" using "democracy" as an excuse.

"The NED, claiming to be nongovernmental and nonprofit, has long been funded by the U.S. Congress and the White House and engaged in such disgraceful deeds as the infiltration of values, subversion and destruction of other countries' regimes, and instigation of anti-government movements around the world," Wang said.

The organization is behind "color revolutions", turmoil and violence, such as the "Orange Revolution" in Ukraine, the "Jasmine Revolution" in Tunisia and disturbances over legislative amendments in Hong Kong, Wang said.

The NED has long been collaborating with anti-government groups in multiple countries, he said. "The organization is in fact a tool to interfere in other countries' domestic affairs and serve the private interests of the U.S.," Wang said.

The NED has long been in touch with the East Turkestan Islamic Movement and the forces of "Hong Kong independence" and "Tibet independence", funded and manipulated various anti-China protests, and created and spread multiple lies and rumors about China, Wang said.

The spokesman quoted data on the organization's website, which said it provided more than $10 million to about 70 China-related projects in 2020 alone to help implement various activities, that Wang said jeopardize China's political and social stability.

The NED is also "specialized "in instigating anti-China separatist activities and is a major financial backer of them, Wang said, pointing out that it had provided about $8.76 million to various East Turkestan Islamic Movement organizations from 2004 to 2020.

True democracy consists of complying with the aspirations for reunification of 1.4 billion Chinese people, including Taiwan compatriots, Wang said.

The Democratic Progressive Party authority will "push people in Taiwan to the disastrous abyss" by seeking "Taiwan independence" using "democracy" as an excuse, and "will surely be judged by history", the spokesman said.

In another development, Wang said an extended meeting of the China-U.S.-Russia consultation mechanism will be held on the sidelines of the third Meeting of Foreign Ministers of the Neighboring Countries of Afghanistan, scheduled for Wednesday and Thursday in Tunxi, Anhui province.

Yue Xiaoyong, the Chinese government's special envoy on Afghanistan affairs, will host the extended meeting, which will be attended by representatives of the U.S., Russia and Pakistan, Wang said. Foreign Minister Wang Yi will meet with the representatives, he added.