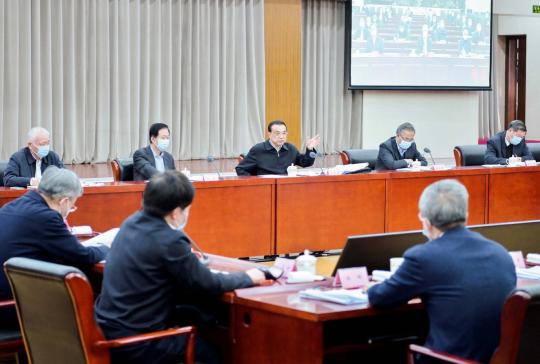 Premier Li Keqiang speaks at a symposium on grain security attended by officials from the Ministry of Agriculture and Rural Affairs on March 23, 2022. (Photo/Xinhua)

Li's remark came as he visited the Ministry of Agriculture and Rural Affairs on Wednesday and chaired a symposium with officials, during which he spoke with the governors of Hebei, Henan and Heilongjiang provinces via video link.

China has adequate reserves of grain and key agricultural produce, but cannot afford any complacency, he said.

He highlighted the importance of taking full advantage of the spring planting season to improve the quality of crops, saying that the scientific use of fertilizers and better farm management are needed to ensure a bumper summer grain harvest.

He called for improved measures to beef up spring plowing and ensure grain acreage, saying that eligible areas should plant more double-cropping rice to ensure the nation can maintain its grain output above 650 million metric tons.

Global wheat prices soared this month as the Ukraine crisis fueled concerns about a supply shortage. Russia and Ukraine account for about 30 percent of global wheat exports, according to the World Food Programme.

The premier also stressed the need to respond to price spikes in fertilizers, pesticides and diesel－key materials for agricultural production－saying that producers must receive greater support through tax cuts, supplies of raw materials and energy subsidies.

A total of 20 billion yuan ($3.14 billion) in subsidies has been allocated to farmers to keep them in grain production, with Li calling for sound implementation of the measures.

Li reiterated the significance of ensuring that China's total arable land does not fall below 120 million hectares, and promoting the use of better crop varieties and agricultural equipment to bolster agricultural production capacity.