Lam: HK must stay alert despite decline in cases 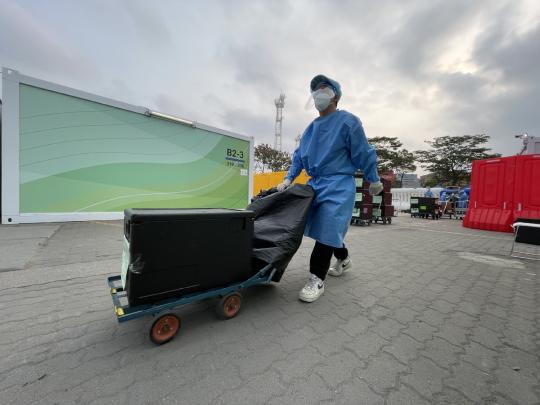 A staff member brings breakfast for people under quarantine at the Tsing Yi community isolation facility in Hong Kong. （Photo/Xinhua）

Hong Kong Chief Executive Carrie Lam Cheng Yuet-ngor has cautioned the public to not let their guard down despite the decline in new COVID-19 infections, adding that the government may adjust the current social distancing measures on Monday.

She made the remarks on Sunday as Hong Kong reported 14,149 new infections, reaching a three-week low in the daily new case count. The city's infection tally is over 1 million.

Lam said the government of Hong Kong Special Administrative Region announced in late February that all social distancing measures would be maintained until April 20. However, given the latest developments, it will conduct a midterm review of the policies and try to announce the result on Monday at the soonest, she said at a news conference.

Lam said that although the fifth wave of COVID-19 infections has peaked, positive results of sewage samples recently showed a rebound in the number of cases, and more residents are going out of their homes.

She reminded the public to stay vigilant against the coronavirus, adding that the final decision on whether to ease existing social distancing measures will depend on the latest pandemic situation.

In addition, as the city's wide application of rapid antigen tests has eased the pressure on conducting nucleic acid tests, Lam said the government will soon restart the mandatory testing operations at places with large-scale outbreaks.

On Saturday, Lam said the government will distribute anti-pandemic kits to all Hong Kong residents by the end of March. Each package will include rapid antigen test kits, masks and traditional Chinese medicines.

She also said that as of Friday, the government had made it possible for all eligible elderly and disabled people in the city's more than 1,000 care homes to receive their first vaccination dose. In the next phase, it will enable the groups to receive their second inoculation by April 15.

The freighter will fly six times a week, with the chartered service initially planned to last until early April.

Chief Secretary for Administration John Lee Ka-chiu also reminded the public to remain in a state of alert and be highly prepared to fight COVID-19.

In a recent interview with China News Service, Lee said it is believed that this "flat curve" of daily infections will last a long time, and that Hong Kong will make every effort to take more solid measures against the outbreak. He also said he hoped that everyone will continue to cooperate in observing anti-pandemic measures and try to shorten the period in which they will remain in effect.

In another interview with China News Service, Secretary for Security Chris Tang Ping-keung said the central government has offered unswerving backing in Hong Kong's pandemic fight, yet a minority of people defamed the generous support and undermined the SAR government's efforts to rein in the virus.

Warning that such actions might have violated the law, Tang said the authorities will investigate and take action if there is sufficient evidence.