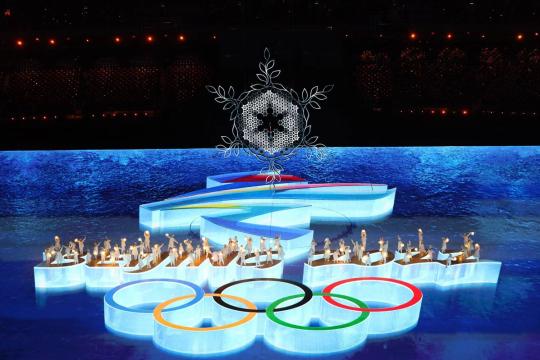 Children perform during the closing ceremony of the Beijing 2022 Olympic Winter Games at the National Stadium in Beijing, capital of China, Feb 20, 2022. (Photo by Feng Yongbin/chinadaily.com.cn）

The success of the Beijing 2022 Winter Olympics belongs to the Chinese people as well as people from around the world, President Xi Jinping said.

In a reply letter to Thomas Bach, president of the International Olympic Committee, Xi said China fully honored its commitment to present the world streamlined, safe and splendid Olympic Games, winning acclaim from the international community.

Xi's letter, which was sent to Bach on Wednesday after the IOC chief wrote to him recently, was released on Sunday.

The Chinese people are where the country's strength came from in hosting the Beijing 2022 Winter Olympics, Xi said in the letter.

Through the Games, he said, more than 300 million Chinese people have been involved in ice and snow sports, injecting fresh impetus into the nation's efforts to promote the development of the Healthy China campaign, enhance the people's well-being, and open up broader prospects for the development of global winter sports.

Xi commended Olympians from around the world who participated in the Beijing Winter Games, saying they respected and encouraged each other, and exerted themselves to give their best performances during the Games.

Saying they perfectly practiced the new Olympic motto of "Faster, Higher, Stronger－Together", he stressed that the athletes also brought warmth and hope to people from around the world, spread the seeds of peace and friendship and triggered tremendous power for humanity to bolster solidarity, jointly overcome difficulties during hard times and work together for a shared future.

Xi expressed his appreciation to Bach and the IOC for their firm and sustained support for Beijing's hosting of the Games.

He said that the Chinese government is willing to develop close cooperation with the IOC, always support its work, uphold the Olympic spirit and promote the robust development of the Olympic Movement, and jointly write a new chapter for building a community with a shared future for mankind.

Bach wrote to Xi congratulating China on the complete success of the Winter Olympic Games. In the letter, he praised Beijing for fulfilling its solemn commitment in hosting the Games.