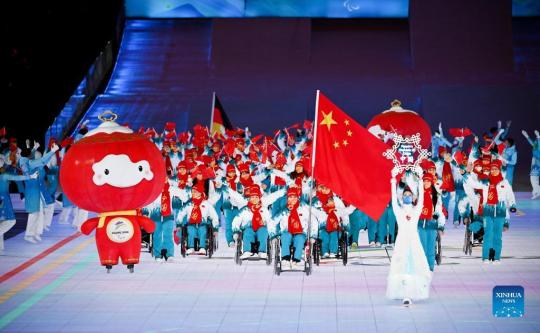 The Chinese delegation takes part in the opening of the Beijing 2022 Paralympic Winter Games on Friday. (LI GA/XINHUA)

Touching performances and technology-enhanced visual effects at an emotional and romantic opening ceremony wowed the world on Friday night as President Xi Jinping declared the opening of the Beijing 2022 Paralympic Winter Games.

Fourteen years after the success of the 2008 Summer Paralympics, the Paralympic flame was once again lit in Beijing, with the spectacular and warm opening ceremony attracting the attention of the world.

President Xi announced the opening of the Paralympics after the parade of athletes at the iconic National Stadium, also known as the Bird's Nest, where the opening ceremony of the 2008 Paralympics was held.

"In 2008, Beijing delivered a high-standard Paralympic Games with distinctive features. Today, 14 years on, Beijing is again the center stage of the Paralympic Movement," said Cai Qi, president of the Beijing organizing committee, at the opening ceremony.

"Under the guidance of President Xi Jinping and the strong leadership of the Chinese government, we have been acting on our commitment to deliver a green, inclusive, open and clean Games."

The theme of the opening ceremony was "Improve, Go Beyond and Together". In one of the highlights of the celebration, the popular red lantern-styled Paralympic mascot, Shuey Rhon Rhon, skated onto the stage during the parade of athletes to welcome the representatives of the delegations from across the globe.

"The venues are magnificent. The organization is extraordinary. The COVID-19 prevention and control-safe and efficient," International Paralympic Committee President Andrew Parsons said at the opening ceremony.

"The hospitable Chinese people have built the stage to fully showcase the best of Paralympic winter sports. Efforts to encourage and engage persons with disabilities to try winter sports have been outstanding. To the people of China: Xiexie (thank you)."

The atmosphere at the Bird's Nest reached its peak when the Winter Paralympic caldron was lit by visually impaired athlete Li Duan, a four-time Paralympic gold medalist.

As the final torchbearer of the Paralympics torch relay which started on Wednesday, Li ascended the platform, reached out to touch the snowflake sculpture, and placed the torch onto it.

Li used to be a professional basketball player in the national youth team, before a fire extinguisher explosion caused him to lose his vision at the age of 18. Two years later, he was rediscovered as an athlete in triple jump and long jump.

He said that lighting the flame resembled when he first started his training in jumping, as it required him to repeatedly practice to master the distance and precision.

Team China will compete in 73 events, with a record total of 96 athletes, aiming to inspire over 85 million people with disabilities in the country to reach beyond their limits.