Charm of sport and culture as Olympics meet Spring Festival 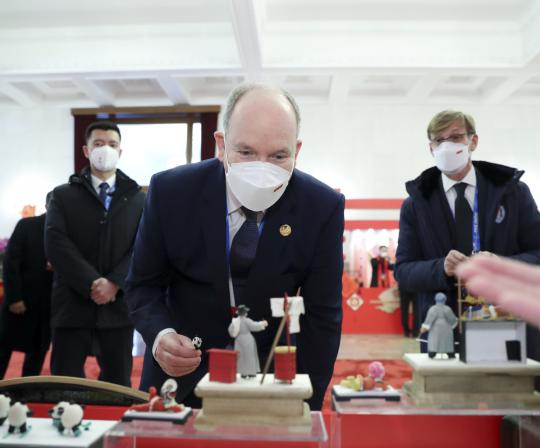 When foreign dignitaries arrived in Beijing for the 2022 Winter Olympic Games, which opened on the festive occasion, a mini temple fair at the Great Hall of the People greeted them with the best of China's traditional arts and crafts. It was part of a welcoming banquet honoring guests from afar.

On the day of the banquet, in a hallway decorated with red lanterns, eight folk artists entertained guests with a variety of handicrafts from traditional Chinese knots to Peking Opera masks, creating a joyous holiday scene.

Xu Yang, a paper-cutting expert in his 70s, was scissoring out portraits of those walking by. His work got the attention of the Singaporean president, who decided to try at a cutout Chinese character with the help of the master.

Next to Xu's stand, Prince Albert II of Monaco received a lifelike dough figurine of the Olympic mascot Bing Dwen Dwen, before asking for a second one for his twins. International Olympic Committee President Thomas Bach joined other arrivals in flying painted kites.

Indeed, when sport meets culture, it is a double charm. Back in 2013 when bidding for Beijing 2022, China's organizing committee already had in mind the idea of knitting the country's fine cultural heritage into the preparations for the Olympics.

The cultural elements at the Olympic Games are part of China's efforts to advocate the Olympic spirit with its traditional cultural heritage. Just as the Olympics are as much about winning as practicing true sportsmanship, the value of cultural heritage isn't just in cultural manifestation itself, but also in the wealth of wisdom and philosophies passed on from generation to generation.

Over the past decade, more measures have been rolled out to celebrate China's time-honored heritage, starting with strengthened support and funding from the public sector. Since 2014, special funds have been made available at all government levels to protect cultural heritage and support art and cultural projects.

China's Palace Museum is a case in point. In recent years, the museum issued a documentary on museum restorers titled Masters in the Forbidden City. After it was aired, it kindled such public enthusiasm that the number of visitors to the museum soared. An online store was also opened at the museum to sell cultural and creative cultural products, bringing an ancient culture closer to the general public.

Then came the private sector. In 2020, on China's Cultural and Natural Heritage Day, e-commerce giants including Alibaba and JD jointly launched the first shopping festival designed to promote intangible cultural heritage products and made nearly 3 billion yuan ($423 million) in sales. The event was a success in broadening social participation and encouraging more businesses to start promoting traditional culture.

Moreover, and perhaps more importantly, there is youth engagement. By making folk arts part of the curriculum of schools and universities and by forming partnerships among various stakeholders — heritage experts, private funds and young apprentices — young people are increasingly involved in heritage protection and promotion. Their creativity and social media savviness have helped breathe new life into China's traditional culture.

These efforts have heightened the Chinese's people awareness and understanding of their traditional culture and the inspiring philosophies therein.

One recent example was the opening ceremony of Beijing 2022. When China's 24 solar terms, inscribed in UNESCO's World Heritage List in 2016, appeared on screen to mark the 24-second countdown to the ceremony, they were not only a feast for the eyes, but also a display of the great charm of culture and ancient wisdom.

The beginning of spring in the traditional Chinese calendar symbolizes hope and happiness for the new year. It augurs well for both the Olympics and a world awaiting more positive news.

Such charm of culture is also at work when it comes to deepening friendship among countries. As the Chinese president aptly puts it, cultural exchanges "eliminate misunderstanding and promote mutual understanding".

And that is exactly what China has been doing for years by, for example, initiating the Conference on Dialogue of Asian Civilizations in 2019 to create a new platform for countries in Asia and beyond to engage in cross-cultural dialogue and facilitate mutual learning and good-neighborliness.

As the Chinese culture champions unity and harmony, the Olympics create a perfect opportunity to illuminate the importance of staying united. Faster, higher, stronger and last but not least, together, that is the spirit of sports. And a cultural gathering enabled by Beijing 2022 can be the magic ingredient that brings everyone closer together.